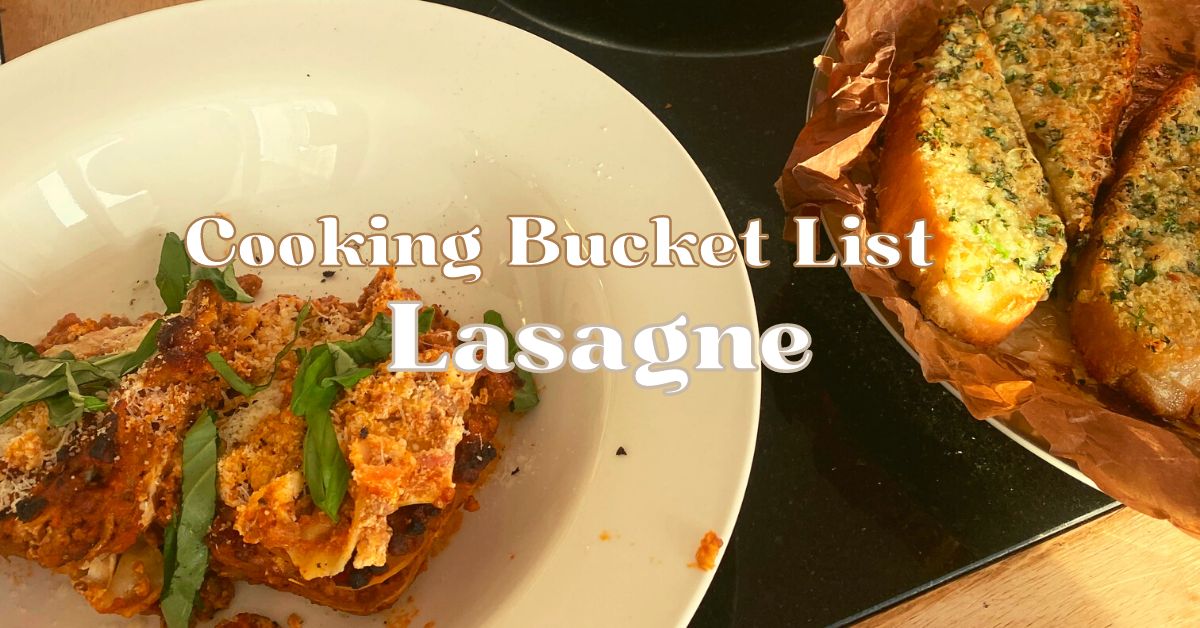 2021 is dead but the Cooking Bucket List lives on!

Last month I made a lasagne for the first time. It was an admirable first attempt and the spoils were passable – even enjoyable. It made for a lovely dinner with a friend, accompanied by some focaccia (the recipe for which is far from perfect), and then served me for dinner the next night, and for lunch at work too.

This past weekend, I made my second attempt, with all my lessons in mind from the first one.

Reader, this lasagne was baller.

First lasagne was nice but it was a guessing game, aware of its status as a test run. Mistakes were made, like not using a layer of red meat sauce to line the bottom of my baking dish. I raw-dogged it with lasagne sheets that were, as a result, tough. I layered the lasagne and baked it as soon as everything was assembled which, while not a cardinal sin, resulted in a less amazing meal. I also made it with a homemade bechamel sauce serving as my white layers. This wasn’t a mistake, just meant for much more cooking and clean up .

For weeks I tossed and turned at night knowing that my lasagne could be so much better. I was haunted by the ghost of Italiano’s past. Lessons had to be learned.

I stayed up until after midnight on Friday cooking. When I make bolognese, I use Bon Appetits (don’t at me) best bolognese recipe, which I’ve come to love. This takes hours. From preparing mirepoix, and cooking everything in stages until it finally all comes together.

While bits and bobs were cooking and simmering, I found time to brown some butter for some cookies, and to make a simple bread dough.

Once my bolognese was ready, I took two cute little ceramic baking dishes I bought from Aldi last summer and started layering lasagne. My sheets were too long and had to be brutally snapped apart. Sacrifices must be made in the pursuit of art.

Having learned a lesson, I lined the bottom of the dishes with bolognese, added my pasta on top, more bolognese, and then spooned ricotta – not bechamel – onto my red sauce. It all blended together easily and prettily.

Luckily, I ended up having the perfect amount of bolognese and ricotta to line two ceramic dishes. I tore mozzarella and stuck it on top of my final ricotta and bolognese layer, then dusted with parmesan and seasoned with freshly cracked black pepper.

Then I covered my creations up with foil, and stuck them in fridge overnight to rest. I’d heard that this drastically improves the texture and flavour of the lasagne, and figured it was worth a shot.

Exhausted, but feeling hopeful after hours of toiling, I went to bed.

The next night, I was so happy to realise that I had pretty much no cooking to do. I heated my oven to 200 degrees celsius and stuck my lasagne, covered by tin foil still, in the oven.

In the meantime, I took my aforementioned homemade bread and got to garlicing it. I made a garlic butter by combining grated garlic cloves, a good few tablespoons of butter, fresh parsley, and salt and pepper together. I microwaved it all together and then spooned and spread the butter onto slices of fresh bread.

After 30 mins in the oven (only 30 minutes because it was a small dish), I removed my lasagne, uncovered it, and put my oven on grill at full heat. From here, I just watched the cheese brown and bubble from the oven door, and watched the little bits of red sauce crisp up as it finished cooking. I removed it when it looked too sexy to handle. I drizzled my bread in oil and shoved that in the oven in the place of the lasagne.

I knew immediately that hours of hard work had paid off, because the lasagne looked unreal. It was steaming like no one’s business so it was left to rest while my garlic bread cooked.

When it came time to serve, the lasagne cut cleanly, as the pasta sheets were so perfectly cooked. It offered no resistance to being lifted out of the dish and placed into a pasta dish. It was happy to be garnished with fresh basil, more parmesan, and black pepper. When the garlic bread was done, the two became best friends.

So, this is probably the best meal I’ve ever cooked for my fiancé. We both really, really enjoyed it. We feasted with red wine, and invited a salad along t the party, just to make us look good (Matt made a simple dressing from olive oil and salt which made it really nice to be fair!).
In the end, we cleaned our plates but didn’t feel stuffed to the point of uselessness for the rest of the night. We supped some more wine and watched an episode of Parks and Recreation before I half baked some cookie dough and served that with vanilla ice cream and strawberries for dessert.