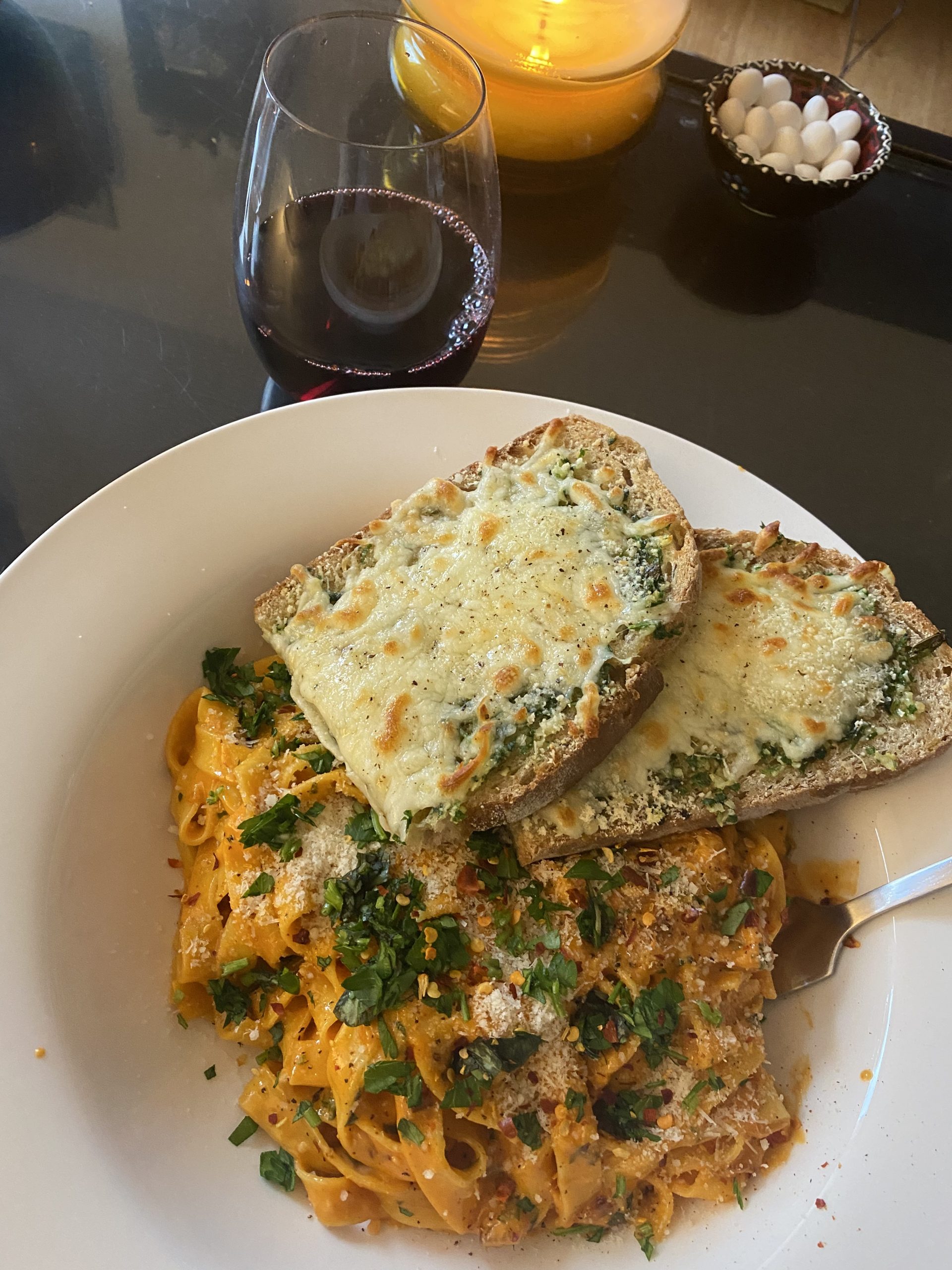 I’ve found that feeling like an independent adult can be as sad as it is liberating. Last month when I had a night to myself in my flat, I decided to combat two items on my Cooking Bucket List: the first were my successful cinnamon rolls, and the second was dinner – pasta alla vodka.

Usually if I found myself home alone for the evening, a chippy would be on the agenda for dinner. My partner doesn’t love them like I do, so we don’t really get them when we’re together. The second he has plans and I don’t though, you know I’m chasing salty and vinegarry goodness.

But last month I decided to make dinner for one instead, not something I usually do. And you know what? It was delightful. I played with a new recipe, had some wine, sang in the kitchen as I pottered about between cooking and cleaning. And then when my meal was ready, I settled on the couch with some more wine and a film my partner would hate. Typing this out, this actually all sounds very spiteful? I promise I love my fiance with all my heart, but he just doesn’t love horror films and greasy fried food like I do!

Anyway – onto the pasta. I didn’t really use an exact recipe. Instead I had a look around at some other recipes for a consensus on the ingredients and went ahead myself. For my pasta alla vodka, I used several garlic cloves (as many as felt right that night, I’m sure), a shallot (cooking this again later, I used onion instead. I just so happened to have a spare shallot when I first made this), lots of crushed chilli flakes, and a good couple of heaped tablespoons of tomato pasta, 25ml vodka (though I don’t think using more would be a crime!). When all of these ingredients were cooked together, and the liquid from the vodka cooked off, I added double cream (I never measure shit sorry), parmesan, salt, pepper, and some oregano, too. I reserved some pasta water and threw that in to loosen the sauce. Speaking of pasta, I didn’t feel like the traditional penne, and instead went for some fresh egg linguine.

No. I did not finish this dinner. It was so delicious and I swear to God I tried my best but I just made SO MUCH pasta. I couldn’t handle it. I’m so sorry.

Also I was saving a bit of myself for cinnamon rolls. I have little to no regrets.

This was a very quick dish. I hadn’t even thought of how little time it would take. Once the diced onion is cooked to your preferred level, everything gets cooked very quickly and before you know it, you’re tossing your pasta in your sauce. So – this meal is one that feels very decadent and grownup, it’s a real treat that takes less than half an hour to make, and is made out of very common household ingredients (doesn’t everyone always have a bit of vodka stashed away somewhere?).

My sister asked what is the purpose of the vodka was, which was a good question that I didn’t even know the answer to. A quick Google search revealed that it doesn’t make your sauce actually taste like vodka, but actually, just really enhances the flavours of the other aspects in the sauce. You can read a more detailed explanation of why we put vodka in pasta sauce here.

All in, I was stunned with this pasta. I topped it with a mix of basil and parsley (which I also tossed with my noodles), pepper, chili flakes, and more Parmesan. It looked absolutely beautiful and tasted even better. When I made it for my partner a few days later, he was equally taken by it. Pasta alla vodka is a low effort, low cost winner that we will definitely be revisiting.

I just finished reading A Girl is a Half-Formed thing! I really enjoyed it – it was a difficult read in a lot of different ways, but is a timeless classic in the making, and an essential read. Buying a copy through this link is affiliated to me, and I earn commission off of any purchases.