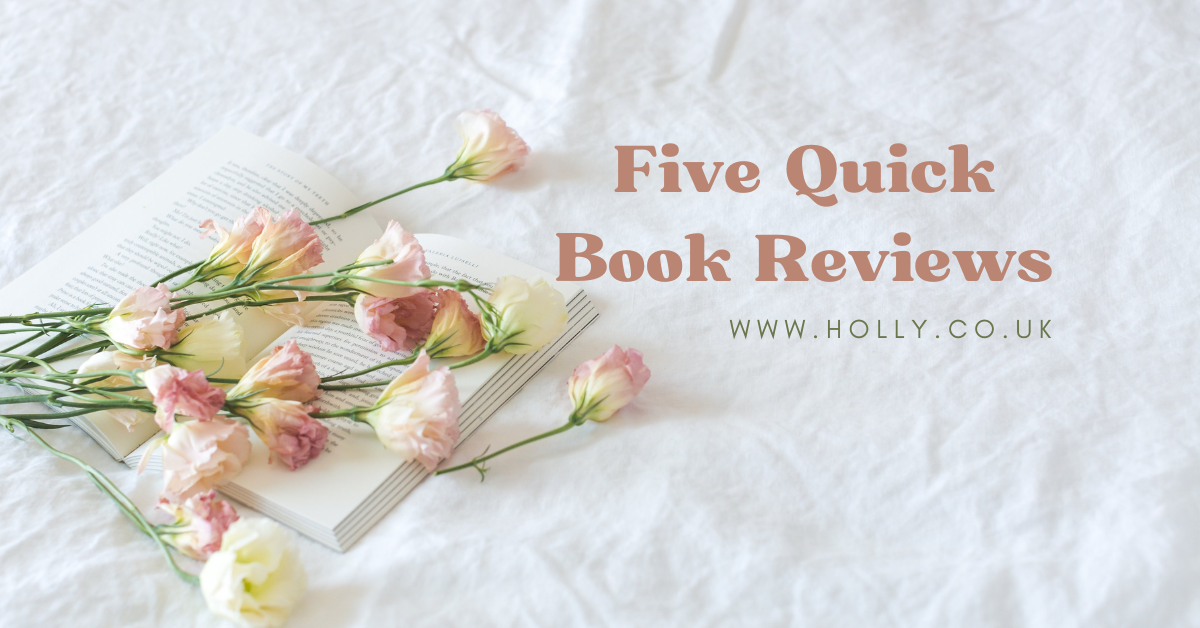 Hey, this is cool: I’m reading books at such a pace that I feel I can’t review each of them individually anymore. So, here’s five book reviews all at once.

As stated in a previous blog, I’m aiming to read 26 books in 2022. This works out to roughly a book every two weeks. Roughly, I’d say that my current pace is maybe a book every week and a half. For the most part. Unfortunately, I’ve faced a couple of books this year that have caused a bit of a slump, and pretty much halted my reading habit.

I’m on a mission this year to finish every book I’ve picked up. For some reason. I’ve no one to prove anything to, apart from Good Reads, who doesn’t allow users to mark a book as unfinished. Unfortunately, I’m a completionist, and unable to allow Good Reads to daunt me with a liar’s “read” list.

But there’s always a bright side, right? Sometimes, reading a book you don’t like is kind of fun. As a writer, I often find it easier to learn lessons from books I haven’t enjoyed more than books I have enjoyed.

Anyway. Here’s five quick, very mixed, book reviews. Some I loved, some I hated. Looking for your next read, or welcoming warnings for what to avoid? Look no further!

One thing about me is that I like disturbing horror novels. The Troop was super gross, and I was super into it. Tender is the Flesh was a nightmare that I had no strong desire to wake up from. The Wasp Factory was weird and strange and fucked up. So, I really liked it!

Concerning itself with the life of Frank, a boy with no birth certificate living on a remote Scottish island, with only his mostly-absent father for company, this classic horror explores the strength of familial bonds, the inherent self of sense, and delving into the different minds of madness.

The Wasp Factory can expertly breed discussion, as its ending gives way to a hell of a lot of questions. It made me think about the perception of horror and how it shifts between generations. If you’ve read this, please come and speak to me about the ending. I have thoughts.

I was really excited for this one ahead of its release, but for years on, I find myself going against the grain. I am a part of 1% of Good Reads book reviews that have marked this book ⅕ stars.

In a narrative that reminded me of Stephen King’s IT, the Chalk Man is told through the dual perspective of Eddie, cutting from childhood to adulthood. As a child, Eddie and his friends communicate with chalk men drawings as several gruesome accidents and sudden deaths befall their sleepy English town. As an adult, the chalk men come back to haunt Eddie and what remains of his friends, as unsolved mysteries from childhood come screaming back.

For the most part, I found the plot for this really random. There were a few gory descriptions that were impressive but I also couldn’t connect with any of the characters, which also hindered my enjoyment of this book. I didn’t find any of them likeable at all really. One thing I will say about this novel is that it’s really readable, and I didn’t ever think about leaving it unfinished, despite not really enjoying it.

I seriously wanted to like this one, I swear. I was shocked and upset when I just couldn’t connect. But, it’s not for me.

The Invention of Solitude

I don’t read much non-fiction, so I decided to spread my wings some this year and finally read a book that was assigned reading during my third year of uni, three whole years ago now.

The Invention of Solitude, told in two parts, explores the sudden death of Auster’s father, and Auster’s following thoughts on ruminations on life as a son, a brother, a father, a husband, and a writer. The first 75 pages tell the story of Auster’s relationship to his father, and the new perspectives that his death have provided. The second, longer part, sees Auster describe his life and career through the third person.

I found this meh. I didn’t connect with it, which isn’t necessarily a criticism. I’m sure it’s just not for me, may be for some others who enjoy non-fic more than I do. The first part of this book was much more enjoyable for me; I much preferred the content and the way in which the story was told. I found the second part to be too long and indulgent.

Seriously going against the grain now: I hated Shuggie Bain. No one else I know feels this way about Stuart’s debut, which won the 2020 Booker prize. Most book reviews I’ve seen for Shuggie have been glowing. This is the culprit behind my reading slump. It took me a month to read, and I seriously considered ditching it. But from all the praise, I could see that this would probably become a quintessential Scottish fiction, and I didn’t want to miss out.

This novel tells the story of Shuggie, a young boy growing up in working class Scotland, the youngest of three children, son of alcoholic Agnes and non-committal, scheming Shug Bain. We see the family whittle its way down to just Agnes and Shuggie, as everyone who can leave them does so. Shuggie stands fiercely by her mother and we watch her succumb to alcoholism and depression, recover, then succumb again.

Uh. So I just didn’t enjoy this. I found it miserable and pretentious, and I really prefer my books to be one or the other, but not both. I thought the narrative was like, mean? Not really in a touching way that was telling an affective story, but more in the way of “eeeee look at the wee boy getting bullied, eeeeee look at the wee boy’s mum being an alcoholic. Eeeee, look at it!!” It was really unsatisfying, and I felt there was no sense of resolution in the end either.

I think I might get the pitchforks for this one. So be it. I didn’t like this.

This was a holiday read, and it was so splendid and, as the title says, gorgeous! Perfect in the sun with bird song and wind sound as backing track.

Little Dog is Vietnamese, living in America with his immigrant mother and grandmother. His narrative explores growing up as Asian American, as he navigates the different cultures that surround him. Later, he explores his sexuality, loss, and healing.

I don’t actually have much to say about this one, and that comes from a place of feeling awe struck. This book is seriously beautiful. It is insightful, heartbreaking, and important to its core.

If you enjoyed these book reviews, please be sure to read more! Tell me in the comments if you’ve read these books, and what you thought of them.