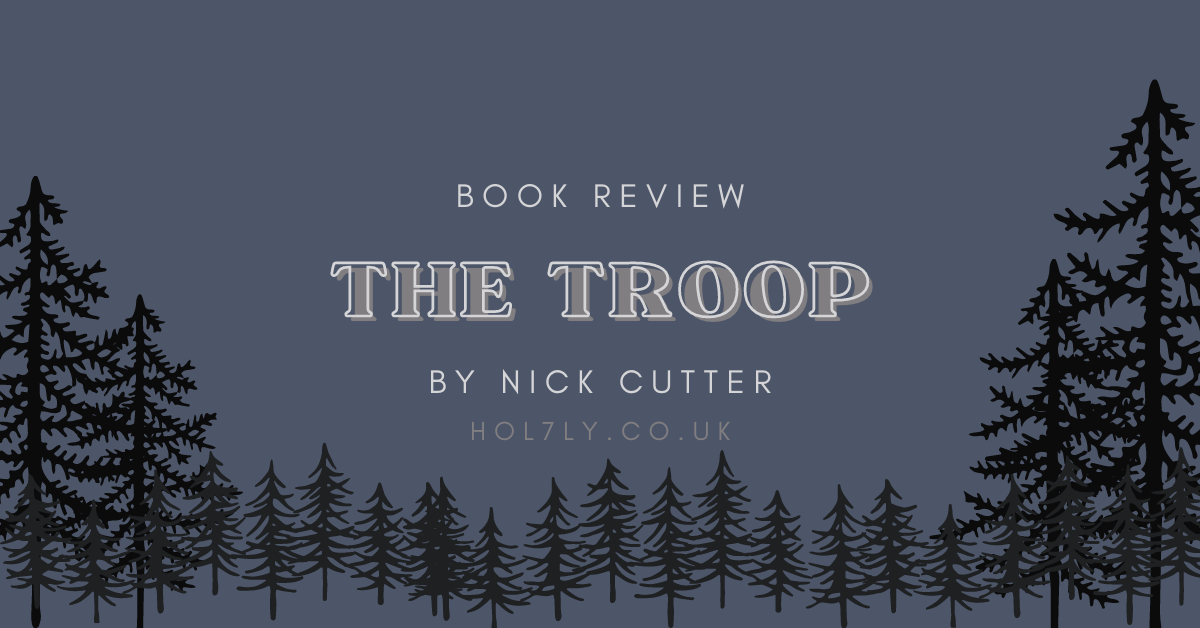 One of my last reads of 2021 was a dark, gruesome, nerve-wracking, and sickening story that I obviously really enjoyed. Reading Nick Cutter’s splatterpunk work the Troop filled me with a really, seriously fun feeling of dread, and I absolutely tore through it. If you can stomach some grotesque body horror and you’re ok with descriptions of young teen boys being absolutely fuckin brutalised, mentally and physically, this book is for you! I just wouldn’t read it before or immediately after eating unless you wanna upchuck your meals.

The Troop sees Scoutmaster Tim lead his squad of boy scouts to a small deserted island not far off the coast of their quiet hometown. They’ve done this trip a million times before, and they can practically see their houses from the island’s beaches – this shouldn’t pose any danger whatsoever. Tim is growing increasingly saddened and frustrated in equal measure with his charges, however – they’re growing, and he knows they soon will no longer be interested in Scouting, and they’re also becoming little disobedient assholes.

The troop is made of 14-year olds jock Kent, nerdy Newt, creepy Shelley, angry but kind-hearted Eef and Your Regular Joe, Max. Max and Eef are besties for life, Kent has an alpha complex, Newt just wants to be liked but can’t stop being such a fucking nerd, and Shelley…we best not talk about Shelley. No one is crazy about Shelley.

Their adventure goes to shit when an emaciated stranger happens upon their camp. His hunger knows no bounds and upon finding him, Scoutmaster Tim finds him utterly repulsive; he is grossly pungent, ugly, and acts disturbingly strangely. Still, Tim is a surgeon, and recognises that this man is sick. In what turns out to be a REALLY bad decision, Tim performs an impromptu surgery on the man; in cutting him open, he releases the disease that has plagued him.

Now, the boys are faced with putting all the skills they’ve learned as scouts into practice or facing death – either by starving on the island, or succumbing to the plague now wracking their base.

The book is told through third person narratives tied to each of the boys in turns, and the odd chapter is told through some other account of the events that took place on the island, mostly after but sometimes before it all kicked off. There are cold, blunt, and harrowing experiment logs of the development of the disease before it is released; there are glossy magazine interviews and recounts of the events after the fact; we read snippets of the court case that dissects how everything we’ve read has come to pass. Cutter drips information to us in a really scintillating way, teasing us with just enough information in every chapter, making it harder and harder to guess what happens next.

At one point, the narrative dashes from Kents point-of-view to Shelley’s point-of-view really deftly; one moment, we’re seeing this confrontation from Kent’s mind, the next from Shelley’s in a dizzyingly thrilling chapter.

We don’t witness the boys transition into manhood in this narrative – surviving the horrors they come across don’t toughen them up into buff, steely, men. They all react to the situation in their own unique ways, which creates a really vivid and varied telling of this story. But they’re still boys. They still crave the comfort only their parents, or any adult, with their experience and authority, can provide. They don’t force themselves to grow up and, in fact, as they fall into hopelessness and despair, they mourn their own adulthoods that they fear they will not have. Kent, who before all this presented himself as the untouchable, macho leader of the pack, just wants his dad to come and save him. As Shelley succumbs to complete, terrifying madness, it is Newt, the groups bully victim, who really manages to be the anchor the group needs; he pushes them to do the tangible, logical tasks they must to survive, as ugly and scary as these tasks can be.

All of this is so effective in making the book subversive, and really sad at times. In between grotesque body horror and despair, there are real relationships that are put to the test, and the chemistry between the boys is so palpable and real, it just ends up being unexpectedly heartbreaking.

Max and Eef are, as previously stated, besties. They’ve been best friends for years, and their relationship is at first very wholesome. They lean on each other and when little cracks in their foundation start to appear, they are both preemptively distraught. If only they had the vocabulary to express clearly that neither of them want to see any fractures in their relationship. Paranoia and fear comes between them, and it’s shocking how much is left unsaid between them before…you know, spoilers.

Cutter is fearless; he kills at a whim, unexpectedly, and without remorse. He flings his boys into terrifying circumstances quickly, and they have no safety net. The descriptions of what come to pass are sickeningly vivid, so for anyone who really wants to feel their guts twist, I really recommend it. This was a really fun read, but less fun to discuss when folk ask you what you’re reading.

Support me and my blog by buying your own copy of the Troop through this link! I’ll earn a little commission and you’ll be entertained and horrified in equal measure 🙂