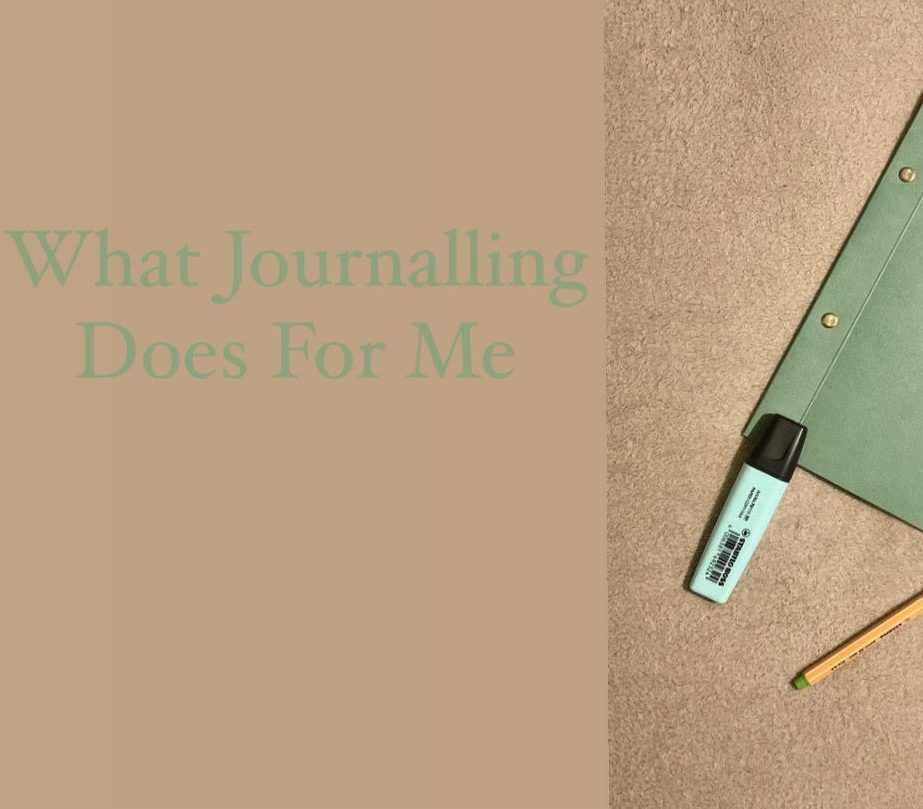 What journaling does for me

On the 22nd of January this year Nicola Thorp told the Metro that she was turning her ‘to-do list into a ta-da list’. The article made me feel extraordinarily seen in a way I never had previously, and in a way I thought I never would be. Thorp shared her experience of writing herself to-do lists from when she was a child, where she’d instruct herself to wake up at 7:25am, to shower at 7:30, and continued to shape her day in small increments of time, every minute accounted for.

Before reading this article, I thought I was completely alone in taking part in this kind of behaviour. I’ve only really told people about this habit when I’ve either trusted them completely, or put on a veil of sarcasm so I could still hide what I never previously considered weird.

Because, now, I do think it’s weird. I think mapping every minute of my day in five minute increments was an odd way to practice self-control. It’s strange that my main motivator to do things was to write them in unerasable ink. It’s weird that I became agitated when extenuating circumstances like traffic or cancellations changed the schedule I’d set myself.

What’s weirder now is how I still see merit to this behaviour, despite how embarrassed it makes me feel in general, and how upset I would be when my to-do list was disturbed.

During my final year of uni, when I found myself unable to try to stick to any stable work schedule, which in turn made me feel overwhelmed, I tried to go back to this. The night before I was planning on a productive and healthy study day, I wrote my to-do list:

And so it went. Unfortunately, I’m not the person I was when I was fifteen. I’d like to think I’m a degree or two more well adjusted; mature, even. I snoozed my alarm at seven, didn’t get up until after eight, lazed around in bed, scrolling through Twitter for far too long, and I finally showered far too late.

The day was shot. There was little in ways of productivity.

As I said, at fifteen if I’d overslept and missed all of my to-do list items, I would have been extremely worked up. I honestly don’t know what I would have done – would I have tried to power through breakfast, my shower, skipped putting makeup on, so I could catch up sooner?

Would I have sunk into a spell of depression for the day, humiliated with my own failure to follow a simple list?

At twenty-four I recognise that my reaction would have been a coin flip.

A Forbes article from two years ago recognises why one might call this behaviour obsessive, but argues back: it’s not micromanagement if it’s at your liberty.  Writer John Hall explains that his regimented daily schedules are flexible enough to allow for changing circumstances around him, but rigid enough so that he’s never stuck wondering what he’ll do next.

The purpose of Hall’s schedule is, seemingly, to take control of the world around him instead of allowing his surroundings to dominate him. This, as an adult, as an entrepreneur, seems to work for him. In fact, he has even founded his own time-management app. His words are brimming with confidence which clearly impacts his ability to maintain authority over his time, which comes with an understanding of how flexible he can truly be in the case of chaos.

So, maybe this is where I am: in the past few days, through thinking of this piece, I’ve come to realise that I have problems with control. Last year, in the final months of my undergraduate degree, I felt completely overwhelmed juggling coursework and arranging for our poetry society to make our way to Birmingham to compete at UniSlam. On top of that I was trying to manage and arrange events for my own creative writing society that I had founded that year. Instead of slowing down and asking my friends for help (I know now that they would have been more than happy to assist me in anything), I tried to write down the tasks I had to do and prioritise them, tried to lay them simply on paper to show myself that they weren’t scary.

Despite that, I still felt like I was drowning. But not once did I really, actually ask for help. I’m sure it was offered, and I found myself saying no. I said no to help when I needed it, I domineer when it comes to cleaning the flat I share with my other half, and I regularly aim to achieve more than I deep down know I can do – though I get this done on time, it takes a toll.

So, unlike Hall, I was not scheduling my day at my liberty. In fact, I was making myself feel trapped by my own expectations, and blaming myself for the circumstances around me that warped my schedules.

While I’m learning to understand my relationship with control, journalling is really helping me take ownership over my time and actions. My journal is, in a lot of ways, my own little world. I’m done with traditional diaries and am instead using blank, squared books that I can design completely by myself. I can be as creative as I want, though my base design for pages is simple and minimal. When I’ve filled all the space I need for notes, to-do lists, and reminders, I can then add little doodles, stickers, and whatever else I want. The end result is a calming page to look at, that also fills me with some sense of accomplishment as I can look at all of the ideas I’ve had and tasks I’ve completed.

With my journal, there’s more energy and emphasis in creatively scheduling my day and in the way I present it to myself, instead of regimenting myself based on how I think I can most productively utilise my time. The end result is a kinder focus on productivity that I encourage myself towards in a way that I can actively engage with. Creating a pretty page and filling it with goals instead of tasks is an accomplishment in of itself as I support myself and endeavour to understand further my own brain and how best it works.

Sometimes I really do miss being able to control my day completely, but now I realise how restricted I really was. Even how much fun I could have was controlled. Now I don’t always meet my goals, but I still aim high and I still get close, most of the times anyway. I tell myself that some is better than none; that a page of shitty words and bad story is much easier to edit than nothing at all, and I’m trying to take comfort in the knowledge that I can’t control everything around me, and now I know that I won’t let that ruin me.