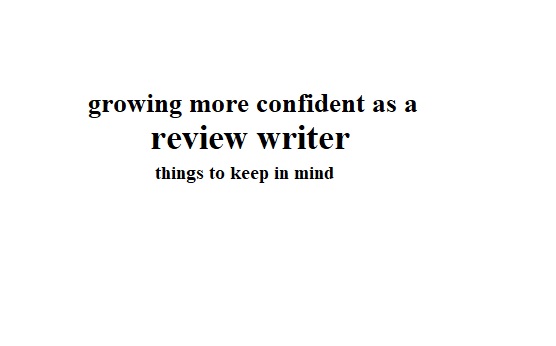 No one told me that writing reviews would be difficult. It’s a very intimidating form of writing, I think. In each niche of reviewing, you’re contributing to discourse in established communities. Film reviewing is particularly difficult for me because, to be blunt, I think a lot of people who are heavy into films and film reviewing are elitist assholes who would commit a war crime just to be given the opportunity to lick Quentin Tarantinos’ big toe.

Something I’ve struggled with, in this light, is accepting that my opinion holds weight and that I’m allowed to share them. People can disagree all they want, but I shouldn’t be intimidated by louder voices telling me I’m wrong, or by those who use big scary words and jargon. A lot of reviewers are so insightful and elegant in their work, and I think I’m far from that, but fuck it: I like to talk about things I’m passionate about.

In practicing reviewing, I’ve learned lessons about what I should include, what’s worth including, and generally I’ve begun feeling far more confident in writing reviews. Here are the thoughts I keep in mind when writing reviews.

What constitutes a talking point for a review, I mean, officially? In my first film reviews I thought I’d have to harp on about cinematography and subtext and the complexities of film making, of craft. I’ve learned that these things don’t need to be in a review, though. I didn’t really know how to comment on these things, so any attempts were half-hearted, not well informed, and only really scratched the surface. They were taking the space of the things I actually wanted to talk about – the things I thought no one cared about.

Well, here it is: if you want to talk about it, it’s a talking point. Cinematography and subtext can be talking points, then, but only if they stand out to you, and stay with you after your viewing experience. If a certain scene jumps out, a song or score, a character, or even a line of dialogue are the things you find that are most affective, then they’re your talking points.

Your review will read so much better for passion. Write about what made you love (or hate!) a piece and people will connect so much more with your words.

Although the review community can be intimidating, it obviously is extremely helpful to get a taste for what’s out there. Reviews can take so many forms – when it comes to film reviews, I read mostly those presented in the Guardian and Empire. Depending on the reviewer, both outlets publish very varied reviews.

For example, in the Guardian I’ve seen a handful of reviews that are only a handful of paragraphs long. One introductory, contextual paragraph, an opinion paragraph, and a conclusion, sometimes. They can be brief but effective. I thought maybe these concise reviews would be for films perhaps the viewer didn’t rate well, but there are plenty of four and five star reviews that are short.

There’s such a wide range of voices out there, and sometimes it takes hearing them to find your own voice.

Say what you’re comfortable with saying

This is reminiscent of point one: if you don’t understand something, don’t feel like you have to talk about it for the sake of it, because you feel it’s expected of you. Set your own expectations and let them evolve through practice!

But also, don’t say things that make you uneasy; by all means, step outside your comfort zone but not to the point of feeling negative or damaged for the sake of a review. Don’t feel the need to review something you hated because you’re afraid of hurting someone’s feelings, don’t feel like you have to lie! If you read or watch or engage with something that troubled you or upset you, don’t give it any more time than you’re comfortable with.

It’s ok to be negative…

…but be constructive. Above I said don’t review something you hated because you’re afraid of hurting someone’s feelings. It’s ok to not love something, and when reviewing something like this, it’s fine to either convey the message “this just isn’t my cup of tea,” or, if you’re feeling confident, address what fell short, what was lacking, what can be improved for next time. Just be kind about it. Be thoughtful.

I honestly don’t think I could leave something a stinking review unless it was actively offensive, like if a book conveyed the message “it should be ok and legal to hit women because they’re women” or “be hateful towards marginalized groups.” If a text was like, pro-Nazi I’m sure I’d really scream from the rooftops for people not to let the author benefit from the people’s readership.

Otherwise, if something is just a bit clumsy, or not as well throughout as it could be, I don’t want to push that person to give up on their craft or passion. I’m a writer too, and if someone came for me, telling me my work had no redeeming qualities, I’d be crushed. We’re all human, and every film, book, poem, and anything else is a product of someone’s hard work – their time and effort. By all means, aim to help someone improve – do this by suggesting what can be done, and sandwich it with what you recognise as strengths of a piece.