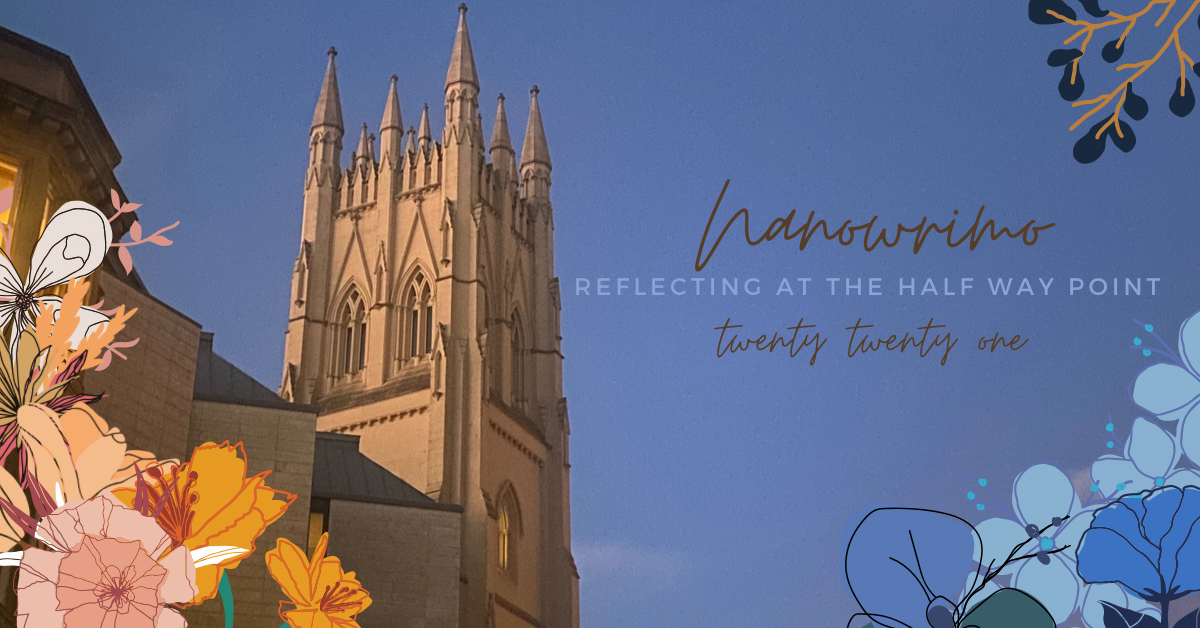 This month, so far, has been a weird one. Feels like it’s dragging and flying by all at once. My lunch hours and nights have been spent by in large writing as I’ve been participating in Nanowrimo 2021 – if you follow me on Twitter, you’ll be more than aware of this as I moan about it incessantly.

For those who don’t practice, Nanowrimo means National Novel Writing Month, which was started by the eponymous charity that encourages creative writing around the world. They also host Napowrimo, which is national poetry writing month, in April!

The goal of those participating in Nanowrimo is to write 1,667 words each day of November, which, if you stay on your daily target, will land you with 50,000 words, which can be the size of a first draft of a novel, or can be a massive chunk of a first draft. Personally, I aim to do 2,000 words each day, purely because that’s easier in my head to remember!

This is not my first time participating in Nanowrimo; I think my first time was 2018, but by then I was already working on a first draft, which I completed thanks to the challenge. If I participated in 2019 or 2020, I don’t remember it unfortunately!

I spent the few weeks before November planning the WIP I’d be writing for the challenge by writing down what happens in it scene by scene, and then attributing those scenes to chapters. The WIP in question is actually an idea I started to develop all the way back in 2015, and something I wrote several chapters of in 2017. I guess what happened then is what has always happened to me; I’ve been working my wee heart out on something and burned myself out to the point where all I can do is abandon the piece.

However, as I’ve set myself out on new challenges over the year, I’ve always thought back to this story. It was something I was fixated on for a very long time, and the story was all there for me. As the end of summer approached, it was on my mind again and I decided to redevelop for Nanowrimo.

Redeveloping looked like refamiliarising myself with the plot points and characters, and changing the setting, both temporally and geographically. It was originally set in 1985 Canada but this year I remembered I’ve never been to Canada and have no idea how anything works there, and I felt that I couldn’t add the colour I enjoy from other works that come with intimate familiarity. So now we’re in Scotland, in 1989, but the second part of that is still up for debate.

I’ve been writing every day! As of the 16th, I have a 16 day streak, which I’m super proud of. At time of writing, I have just under 24,000 words. Yes, this is slightly behind compared to where I want to be, but ultimately I’m still proud of myself for making the effort to write every day. Life gets in the way sometimes, but we move!

My fiance made me agree to put effort into not burning myself out – thank you Matt! So many times would I boast to him about having written 4,000 words compared to my goal of 2,000 words, and so many times was that chased by me being exhausted by myself and giving up. So, none of that this time. We agreed that I could have a margin of 10% on top of my daily word goal, and after that I’d have to stop.

Stopping writing before I feel mentally done has actually been refreshing. Instead of pouring out all of my creative juices (ew, sorry), I’ve been stopping when I know I’ve written enough for the day. This leaves me often in the middle of a scene and excited to pick it back up the next day.

So, we’re on the latter half of the month! In the middle of it all. I’m going to keep going, and even after Nanowrimo, I’m going to keep going. This idea has been with me for so long, and I think I believe that that means something. No one will read my first draft because I’ve gone down the route of willfully writing badly, because editing something shitty is leagues easier than editing nothing at all. And you know what? I’m sitting here, really excited to edit it. I can’t wait to print it all out, chapter by chapter, and graffiti the pages with colours and ideas.

Plans for after Wrimo include also a vlog I’ve been working on all month, which hopefully explains why I’ve been somewhat vague here? Due for release before the 10th of December but don’t hold me to that!!

Are you participating in #Nanowrimo21? Tell me how it’s going! And add me on Nanowrimo.org at hollyiswriting so we can be nosy about each other’s progress! ✨

Come back next week for a review of this book! this is an affiliate link – I will earn commission from any purchases made through these links to no extra cost for you.