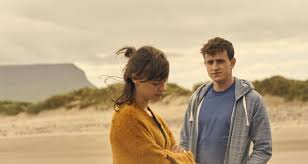 Hi. Not to be a stereotype but I binge read Normal People in just a few days, despite being an obscenely slow reader. I found it super hard to put it down while reading it, and sorely missed it and thought about it relentlessly when I couldn’t. When I was getting to its last pages, I felt like I was a few bites away from finishing a really tasty meal, like I was losing something I couldn’t get back. Like, I loved it. Naturally, when I found out an adaptation Sally Rooney’s 2018 novel was on its way, I was buzzing. So excited. Gushed about it to everyone who would listen. Admittedly, it was really annoying.

When the show arrived on streaming services on April 26 of this year, I vowed to spread my watching of it across 6 days, so I could actually enjoy it. Unfortunately, I had my last ever uni assignment to work on then, so it became my main means of procrastination. I watched like, eight episodes in one day. And I’ve watched the whole series twice since then. I’m just super into awkwardly frustrating tales of first love, I guess?

Now it’s all said in done – the show was amazing and well received by about everyone who watched it. What comes with that is a lot of people desiring, demanding, crying out for more content. A lot of people want a season two. From the first two paragraphs of this blog you might think that I’m in this group, seeing as I’m such a massive fan of both the book and the show, but if you believe this then you are a fool; you see, the article’s headline clearly states that I don’t want to ever see a second season of Normal People. And I don’t. I really don’t, and here’s why:

Remember when we all loved Game of Thrones and how it went to shit when the television writers ran out of source material? That was a bad thing. That went really badly. Did you know that 2004’s Mean Girls, a movie which everyone in the whole world loves, was largely based off of a self-help book called Queen Bees and Wannabes by Rosaline Wiseman? What you may not know is that Mean Girls had a sequel came out in 2011, seven years after its predecessor’s release. I believe the sequel starred jack shit of the original cast and was like, really, super, objectively terrible. There’s a pattern here.

Normal People is one novel, has no sequel, and the show was extremely faithful. It followed the narrative of the book tightly; it started at the first chapter and ended at the last. Any new content would be original content, which could possibly go well seeing as most of the show was written by original author Rooney, but there’s just something about an adaptation going rogue, operating with no source material after the success of the original adaptation, that leaves a bad taste in my mouth. They always have this straight to VHS vibe to them.

Recently, I’ve noticed a rise in non-sitcoms opting for 20-30-minute-long episodes, rather than taking 45-60 minutes – see the Mandalorian, Dead to Me, Homecoming and Fleabag. We went from enjoying big content in the form of film, and then traversed to longer TV shows, and now we’re shortening that. It’s refreshing to be able to enjoy media like chapters where writers and producers are encouraged to make every second count – they’re employing effective storytelling that doesn’t skimp on emotion.

Normal People definitely achieves this. The show packs in and makes the viewer feel all of the intimacy, tenderness, frustration, depression and anxiety the characters feel. It provokes reactions and feelings, sometimes in less than 20 minutes. It’s told such a powerful story in less than 12 hours and honoured the book fantastically. I think a fine way to praise short form television and encourage its continuance is to accept that there won’t be a season two – it’s simply not needed.

It would get boring

Alternatively, in season two we see Marianne and Connell break up and get back together and break up and get back together and so on, so on. We’ve seen that already. We might get to see more drama in between the big relationship milestones (if you count breaking up as a milestone?) but ultimately, how many more times can we see this couple be star-crossed until it just gets to be extremely exhausting?

What if season two took an American Horror Story approach to this relationship drama and introduced new characters and a new theme, new story, loosely connected by the themes introduced in the first season? It would be mostly a different show at best, or a carbon copy with the names changed at worst.

Maybe I’m wrong. Maybe there is an amazing way to carry on Mariann and Connell’s story that I can’t see, can’t think of. Normal People is written intelligently and emotionally, so if a second season was picked up, I wouldn’t be totally surprised if the team smashed it. Though, I think the intelligent decision to make here would be to let the ending we saw in the book/season one be the real ending.

Ultimately, the most important argument against a second season is that doing so would be a dishonour to Rooney’s intentionally ambiguous ending. Marianne and Connell’s fate was left to the interpretation of the audience – if you think they’re the most perfect couple, I’m sure you can see them together in their shared future. If you think them a chaotic disastrous of a pairing, then you can definitely see them continue to destroy each other’s lives.

In the end, if you really want to see more Normal People content then, well, you can always write and read fanfiction.