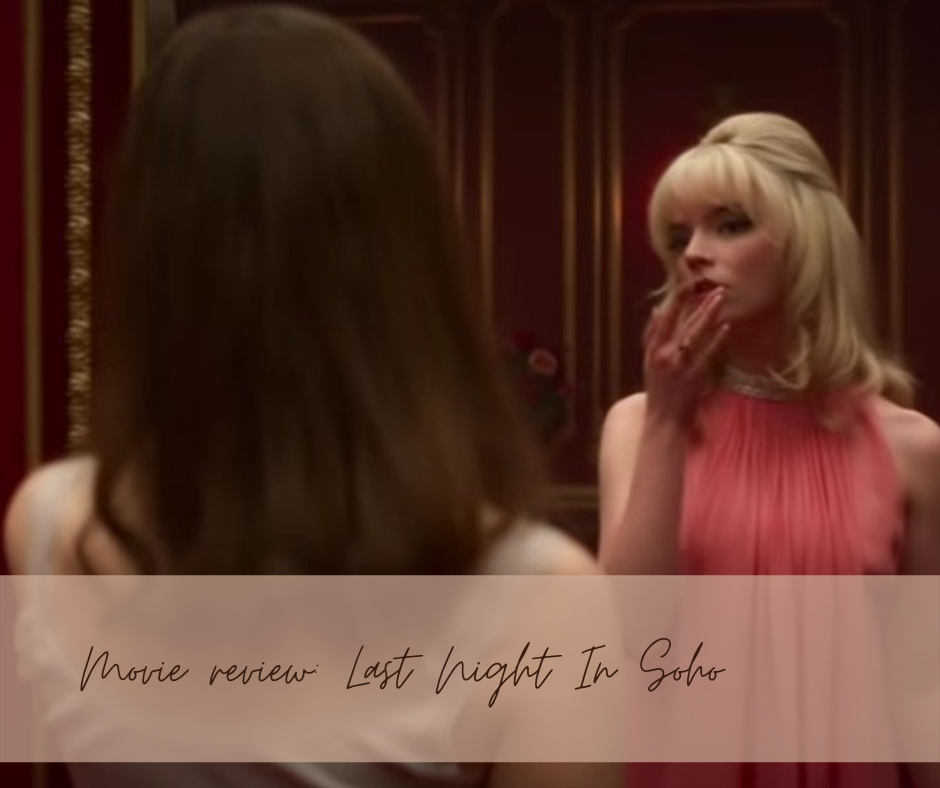 I have been so excited for this movie ever since I first saw it announced on Twitter by writer and director Edgar Wright!!!!!!!!! After months of waiting, I am beyond thrilled to say I was not disappointed by Wrights latest feature – I was thrilled by it, and I am thrilled to be seeing it again on Thursday night.

Last Night in Soho stars Thomasin Mckenzie (also seen in Old!), Anya Taylor-Joy, Matt Smith and, posthumously, Diana Rigg. I’m not usually fussed with Matt Smith but the chemistry he shares with Anya Taylor-Joy sets their performances on fire. Less is more with these two as we see small flashes of them walking together, laughing together, and, eventually fighting with each other. They make for an enchanting pair you can’t keep your eyes off of. Thomasin Mckenzie shows superb development in her role as fashion designer hopeful Eloise.

What struck out to me early on as like, mind bendingly impressive was the mirror and reflection work. Edgar Wright is already established as a creator who pays an extreme attention to detail, but what we saw in mirrors, windows, and any reflective surface blew me away. The dance Eloise and Anya Taylor-Joys Sandy are always performing around each other was breathtaking.

As a creator, Eloise shows the utmost devotion and protection of her muse, Sandy, the literal girl of her dreams. She quickly becomes very attached to the 60’s bombshell, and follows her through her dreamy life. When things quickly take an unsavoury turn, Eloise is dutifully on Sandy’s side, believing her story – her work in the present is affected by it, as are her relationships and, very notably, her mental health.

At a time when movie makers are all pulling at themselves, slapping their own backs because they’ve made a film that is almost three hours long, Last Night In Soho rests comfortably just under the two hour mark. This movie is tight – we delved right into the main conflict way sooner than I thought we would, but nothing ever felt rushed. It all made sense – every plot point led into the next, each story turn well marked by character development and context. Such a short but effective movie was a very refreshing treat.

My review wont do this justice – this is maybe my favourite film of the year! I’m excited for my second viewing, maybe I’ll amend this review with new ideas, or maybe I’ll just continue to senselessly gush over this beautiful, horrible, stylish and mesmerising movie. If anyone needs a movie buddy for this one, I’m open to third, fourth, and fifth screenings.

this is an affiliate link – I will earn commission from any purchases made through these links to no extra cost for you.