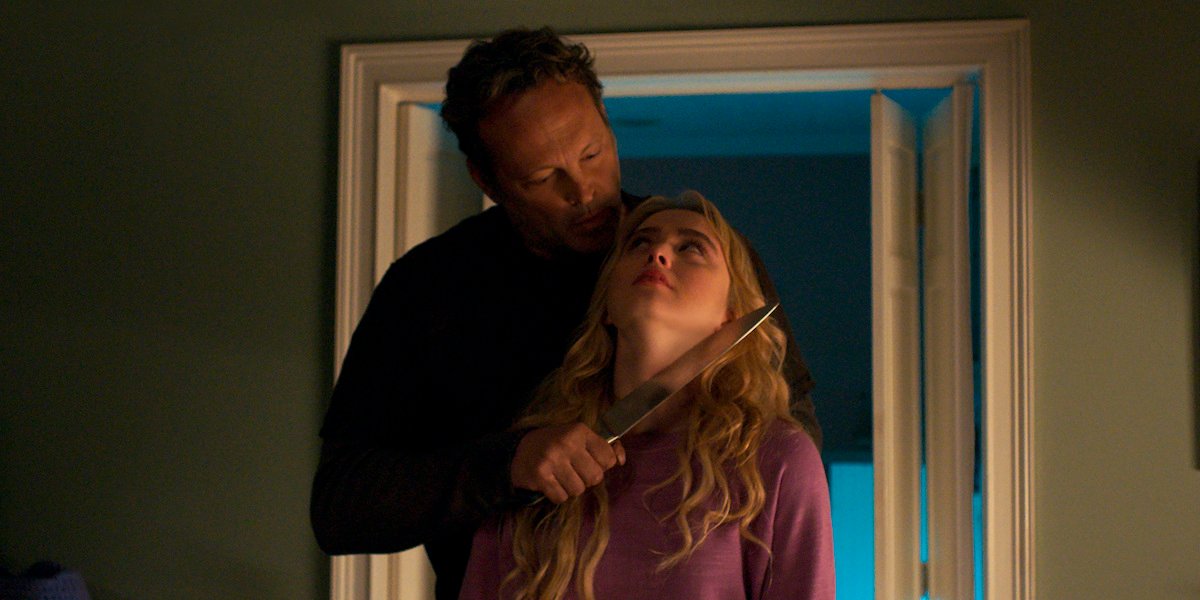 I‘ve been so excited about this movie for ages, so it was a joy and a thrill to finally get to see it, especially after reading really positive reviews about it. Freaky is a new slasher that honours the campy canon with its high school setting and seemingly indestructible powerhouse of a villain. It brought genuinely tense moments as well as a few laughs, and made for a wonderful homage to the classics like Nightmare on Elm Street, Halloween, and particularly Friday the 13th.

Originally named Freaky Friday the 13th, Freaky sees awkward teen Millie (Kathryn Newton) working hard to keep all the pieces of her life together a year after her dads passing. She bends over backwards to be there for her mum, and hides her aspirations of moving away for college. She has a frustrated older sister, Char, and a tight group of friends in Josh and Tyla. She crushes hard on nice AND popular jock Booker, and finds herself as popular chick Rylers bully victim.

She is the focal part of the film, but it is Vince Vaughn’s Blissfield Butcher who brings the film to a screaming start. He creatively rips four teens to fucking shreds in the opening scenes before making it out of the mansion his killing spree took place in with a Macguffin Aztec dagger that sets the main plot into motion.

After a homecoming football game, Millie, in a school mascot costume, waits for her mother to collect her from school. It is dark and cold, and she’s unaware that her mum is passed out cold after indulging in yet another bottle of wine. It is then that Millie spies the butcher from across the car park, who gives chase. Millie tries to hide, but the Butcher is persistent in his hunt, and finally, he lands his mythic dagger into Millie’s chest. Surprisingly, the Butcher is wounded in the exact same place, and takes off as Char arrives to get Millie. That night, Millies consciousness swaps bodies with that of the Butchers’, and the two wake in each other’s homes, much to Millie’s horror. The Butcher takes advantage of his new guise (apt, seeing as Millie’s sister recognised and described the Butcher, so the hunt for him is well and truly on) while Millie sets out to convince her friends that she has been body-swapped.

Chaos and hilarity ensues. For some reason, the Butcher decides to dress Millies body like a damn smoke show and now I’m torn between wife goals and life goals. The red leather jacket, red lip, high pony, and dangerous eyes is an enviable look. On the flip side, Millie enjoys playing with her new penis.

Ryler is the school bully – she’s petite, fashionable and out for blood. I love this agile take on the popular school bully trope; her name sounds like a complete pisstake, which just felt inherently funny to me. She’s so relentlessly self serving, will do whatever it takes in the pursuit of gossip to use as ammunition against her victims, including being DTF with Millie/the Butcher.

Unfortunately this movie does suffer from sounding like the writers have never spoken to a teen in their lives. Josh and Tyla’s first lines of dialogue are burdened with exposition and cringey new slang and pop culture references. When the film exits its introductory stages, this stops being a problem. But still, not an idea first impression.

I’d been looking forward to this movie for ages and ultimately I wasn’t let down. This is a joyous and pleasing watch that I’d be really keen to revisit!