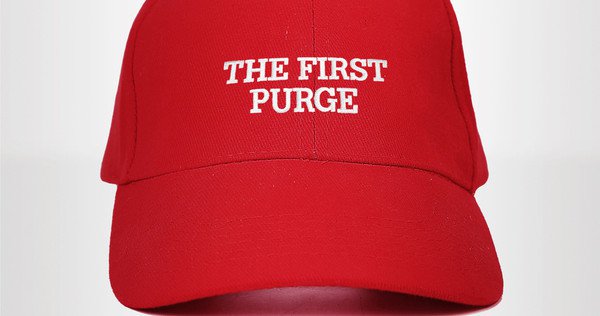 So, I saw the First Purge last night and it was pretty good and very woke!

The First Purge gives insight as to how the New Founding Fathers of America (NFFA) came to be and come into power and also on how the first Purge experiment came about. When natives of Staten Island, New York are targeted as the experiments first focus group, they are asked about how their anger: do they feel like they’d like to release it? We also learn that potential first Purgers were given financial incentive to Purge: $5,000 to register and stay on the island for the night and even more if they hit the streets and vent out some stress. When the Purge plan doesn’t go exactly as anticipated (there are lower numbers of people killing and committing violent acts on other than expected) the NFFA unleashes mercenaries onto the island disguised as gang members and white supremacists. They have backgrounds of military training and so, when they hit the streets, they wreak havoc on civilians everywhere, but especially in low income areas.

Our heroes are drug king pin Dimitri, passionate activist Nya and her younger, naïve brother Isaiah. Dimitri seems content on staying in during the Purge. He doesn’t need the money and he sees the Pure as risky business: having himself or his dealers out on the streets may lose him money if anyone dies. Before the Purge, Nya relentlessly protests the experiment, begging members of her island community not to register for the money, begging them not to participate. When this fails and the Purge goes ahead, she rounds as many people up in a church for safety until Isaiah reveals to her that he had other plans. Sick of living a low-income life in deplorable housing, he takes to selling drugs and signing up to Purge for the money, and swears he will kill the psychopath that cut him one day whilst out on the job. When his plan goes awry, he needs Nya to join him on the streets and take him back to safety.

This was an enjoyable watch but it can’t be left out: our main characters were all pretty one dimensional. Isaiah was the naïve little brother who wants to be a man, and wants to accomplish that by holding his own and taking care of the only family he has left, older sister Nya. Nya’s main character trait is that she’s against the purge and violent, and her secondary trait is that she loves her brother. Sure, she’s brave and thoughtful but we don’t see her much deeper than that. Dimitri is slightly better as he’s the only one who seems to go on a journey in the movie: at first, he wants to stay at home, safe, but when he finds he’s been betrayed by one of his men he hits the streets to kill him. Successful, he decides to head home until he and his second in command are involved in an accident, after which they learn about the NFFA sending in experienced fighters to kill participants and non-participants of the Purge alike. Using a radio looted from a mercenary’s dead body, he and his crew track where the next attacks will take place and, totally decked out in the best of gear, follow and end assaults. He then acts as a one-man army to save Nya, Isaiah and others from a massive invasion in their apartment building. He goes from uncaring, to vengeful, to saviour. Nothing he does is really unexpected but at least we see some growth and change in him.

There’s also a subplot about an NFFA guy and a psychologist in a control room hanging out and watching and analysing the Purge as it happens but who really gives a fuck about that. It was pretty boring.

The movie looked good, I can’t say anything was too bad with the cinematography, except there was a fuck ton of shaky cam in action scenes. I thought we were over shaky cam? It just makes me feel a bit ill now, to be honest. It feels a bit cheap. There were also a few wee jumpscares that, yeah, fair enough surprised me but I couldn’t expect anything less from Blumhouse. The scenes in which tension was used were amazing! Towards the end, in the apartment buildings as the crusade advanced up and up, I was on the edge of my seat, biting my nails. I say fuck off to jumpscares, give me more intensity.

But of course, the movie really landed some great points in showing us an America that doesn’t feel is too big a leap from the imagination.  Black and brown people are directly targeted in this movie and its characters know it. This is very much reflective of the US in real life, where those in ethnic minorities are being persecuted with little to no consequence. Trump’s America is fucking scary. I hope he doesn’t see these movies because I know he’d be sitting there, stroking his weird orange chin thinking, hm, maybe these guys are onto something. Please. Do not let Donald Trump watch the Purge franchise.

As always, the movie ended straight after the Purge ended. We see our main protagonists make their way towards the hospital to see to wounds, like Dimitri’s gunshot wound, as others around go on about life as usual right away. We even see a group of kids enter a basketball court and start playing. Crazy.

I found this ending unsatisfying. We’ve seen Isaiah and his friends go through so much for their financial compensation; I would have liked to see him go to get it. I mean, after the assault on their home, it was left destroyed. Do he and Nya get to the money he was promised to restart life? Dimitri had a friend who got wounded before the climactic attack, did he survive?

The next step might be the second Purge. At the end of the movie, news casters announced that a nationwide Purge may take place in the following year. The whole of America is on a much larger scale than Staten Island, so how does the whole damn country react to being able to Purge out their anger? Are there more protests or is it widely accepted after the “success” of the experiment?