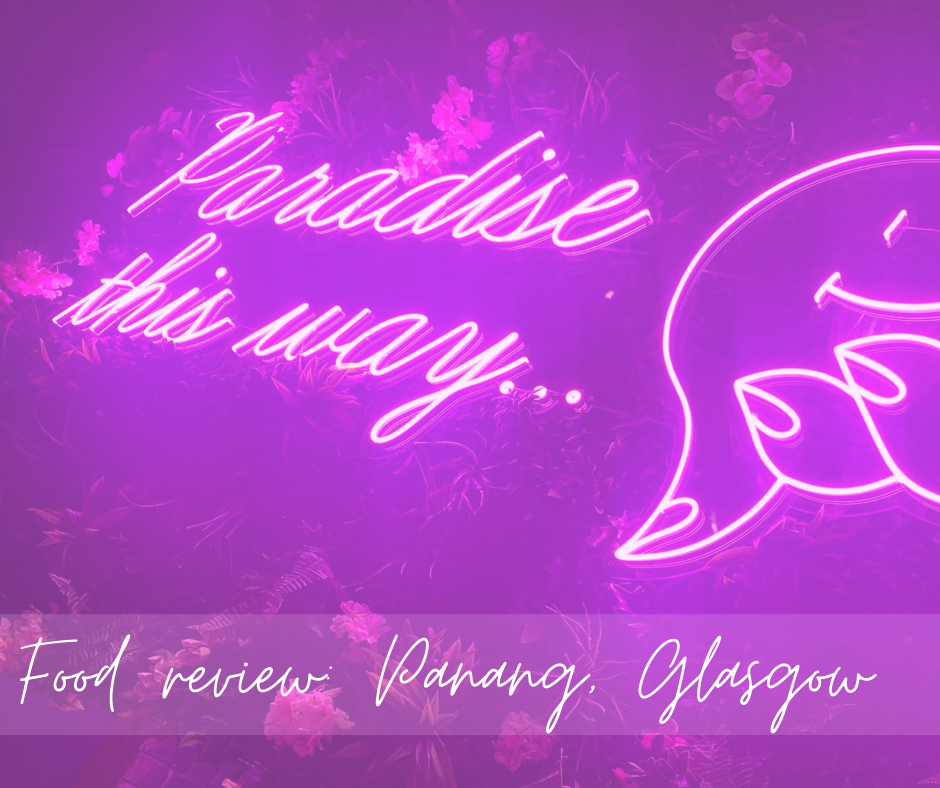 Panang has been on my list since before it opened – I love Thai food, but don’t know of a lot of places in Glasgow to indulge. So, when I heard of this stylish looking, Thai small plates restaurant opening in the City Centre, trying the food wasn’t an if, but a when.

We visited on a Saturday night, our table booked for just after 7. The restaurant was full but the hosts were friendly, welcoming and chill. We headed to the bar and tried mango SamSong Stings – Matt had his on the rocks, I had mine frozen. For variation. Both drinks went down very smoothly.

We made quick work of picking seven dishes to try for our meal, as the waitress recommended getting between six and eight for the two of us. The menu is varied, but not too large; we didn’t agonise between dishes as we were both unilaterally settled on what we wanted.

Satay was a must, as it’s a favourite of ours. We usually go for chicken but decided beef fora change. We ordered vegetable spring rolls, sweet chilli chicken, sweet corn fritters, and a lamb panang curry (we had to try the titular plate, obviously!). For sides, we opted for some sticky rice and fries.

Everything arrived together on these lovely porcelain plates and for a moment I despaired, thinking it didn’t look like enough food (we were VERY hungry). I was so quickly proven wrong, however, as we were determined to finish every bite before us despite feeling so full.

We talked about what our favourites and least favourites were after we were done. Neither of us felt an excess of love for the spring rolls, but maybe that’s just because everything else was so fab! Personally I’m stuck in a three way tie for my favourite; I can’t pick between the panang curry, which was so lovely and mild with coconut milk and lemongrass as key flavours combined with the most tender lamb I’ve had – also my favourites were the sweetcorn fritters which were unrelentingly crispy and paired with a thick and flavourful sweet and sour sauce, and finally the beef satay was also incredible, with the meat cooked so well and the satay sauce being so strong in flavour. Of course the sweet chilli chicken was also delicious, and so spicy! But I was just so in love with the other dishes and still can’t pick my favourite.

With dinner we had a second round of drinks; Matt had a lychee and lemongrass Collins which we both really liked, and I resisted the urge to get a Mai Tai so I could try my first ever Singapore Sling, made with lovely Glaswegin. Both were presented beautifully, and went down far too easily, too.

Honestly, when we visit Panang again, we might have a repeat of this meal after loving it so much. We may swap which curry we get, and though we don’t like prawns, we might just have to try their Thai doughnuts anyway – they looked amazing and the waiter recommended them despite our dislike for prawns! Once again, me being in Panang will be a when, not an if.