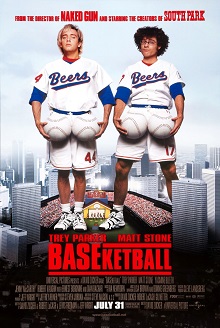 BASEketball is a movie that I often thought I had conjured in some fever dream but it is decidedly a real movie. Released in 1998 and starring South Park creators Matt Stone and Trey Parker, it is a shitpost of a movie that I would die for. I am the first person to happily admit that I love goofy, cheesy and all round shitty movies and TV, and BASEketball tops my list of bad movies that I could watch any night.

I think I first watched it as a younger kid when it was one of those random movies channels like Five somehow unearth and show during week nights. I think I recognised either the names of Stone and Parker from the credits of South Park, of which I was and still am a hardcore fan, or I recognised Parker’s voice, which is just like South Park’s Randy’s. At one point, Parker even uses his Eric Cartman voice which is pretty great. Stone also looks like an adult, unanimated Kyle which is pretty perfect.

Although this movie wasn’t written by Parker or Stone, it is drizzled with the kind of comedy and jokes you’d find watching their show, which is on its 22nd season. Zucker admitted that the two writers contributed many jokes which made it into the movie.

Speaking of jokes, there were a few laughs in the movie when me and my boyfriend watched it last night; like, you know, genuine haha’s. Then, a lot of things fell flat. It kind of played like two comedians with two completely different styles got together to write a movie and compromised on some jokes so the humour wasn’t completely polarizing, but there definitely were different kinds of humour in it. Some of the jokes definitely fall flat but others are undeniably good.

A lot of the time, the story felt really lost, like the writers had written a story element in early on and then had forgotten about it. To their credit, those elements resurfaced later and there were really no loose ends, but there was still bad characters with little to no development and just utter random shit going on. Some of the random shit worked and made for some laughs, but other stuff just seemed forced.

When I was browsing through the new/popular tab in Netflix, I came across BASEketball and was immediately taken by excited chanting until it finished loading and it was on. I normally spend like half an hour browsing Netflix in search of something to watch but when I came across this movie, it was no question. It was my third watch of the movie and of course I’d definitely watch it again!

This movie was definitely trashy and bad, but it is also the kind of trashy and bad I can’t get enough of, so, as said, I will die for this film. I will fight anyone who really hates it to the death. Thank you for listening to my Ted Talk.