Welcome to my first film review!!

Hereditary is a terrific but terrible film about a family of sacrificial lambs unknowingly awaiting the slaughter, and losing their heads. Literally.

Despite mixed reviews, I would definitely call Hereditary the best horror film of 2018. It wasn’t perfect but it was a step towards what I think horror should be.

Ari Aster’s first full length film was an eerie family drama that creeped its way down the depths and into utter nightmare territory. A family, comprising of mother Annie, father Steven, stony son Peter and troubled daughter Charlie, struck down by grief, tries to get by when more tragedy follows and with it, complete horror that no one expected. Plot wise, I’m not sure what I was looking for or looking forward to the end but I am in no way disappointed with what I got.

Long, lingering shots focussed on horrific images that made me feel sick to my stomach. When the truly terrible events occurred, we didn’t see the horror of it but rather the anguish ridden faces as characters realised and reflected on what had happened, creating a much more emotional and intense experience than what other horrors set out to accomplish. Occasionally the soundtrack was made of 80’s sounding synth tracks which  I felt was jarring in such an eerie, detached setting but this style of music was seldom used. Otherwise I felt it fit into the movie in so well and it all, the images, sounds and story, blended in all together well it makes one strong piece.

Hereditary is packed with metaphors and foreshadowing that are interesting to learn about after viewings and fun to look back on during a second watch. Twists and turns make for a thrilling ride that helps the viewer understand what has transpired without holding their hand and making the ending too obvious.

Discussions about demonology and mental health have been opened concerning this film with other viewers taking away thoughts and insights into male privilege as well, so the impact this movie has had has also been very interesting.

As a big horror buff, I’ve been a bit concerned with the state of these movies. Production powerhouse Blumhouse has without a doubt done some great work in funding smaller names hoping to make a reputation for themselves in the genre but their methods aren’t all perfect. Where Blumhouse movies can’t seem to shut up – a scare cannot simply be a scare; it must be accompanied by a shrieking strike of music – Hereditary uses music to blend in and add to the horror of the movie. It doesn’t attempt and fail in amplifying the scariness. Where Blumhouse ends their movies with a final fright which in many cases diminishes the creepiness of the final acts (making it rather, cringey or laughable), Hereditary stays eerie, focussing on Stoney Peter’s face as the audience listens to haunting mantras, making the ending much clearer. Where Blumhouse has been making horrors stale and bland, A24 and Aster worked together to reinvigorate the genre.

Hereditary was so amazing for me and I personally wouldn’t change much about it, I do think it wasn’t extremely accessible for many modern horror fans. I loved terrible imagery which utilised psychological scares rather than jump scares, but I know that this is not what a lot of people want and it is probably resulted in some of its bad reviews, which makes me pretty sad to be honest. It’s too big a step in the right direction, if you ask me. I’d love for all horror to be like this one day but I do appreciate that many movie goers just aren’t looking for this kind of content, and they don’t want it either.

This unrelenting, grim movie showcases some great cinematography and fantastic performances, especially from leading woman Toni Collette who gave a believable and desperate act. For those looking for a psychological thriller to haunt them all night, look no further because in Hereditary, you’ve found it. 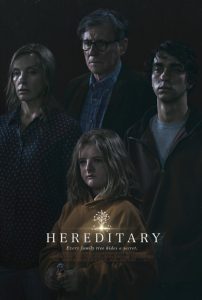