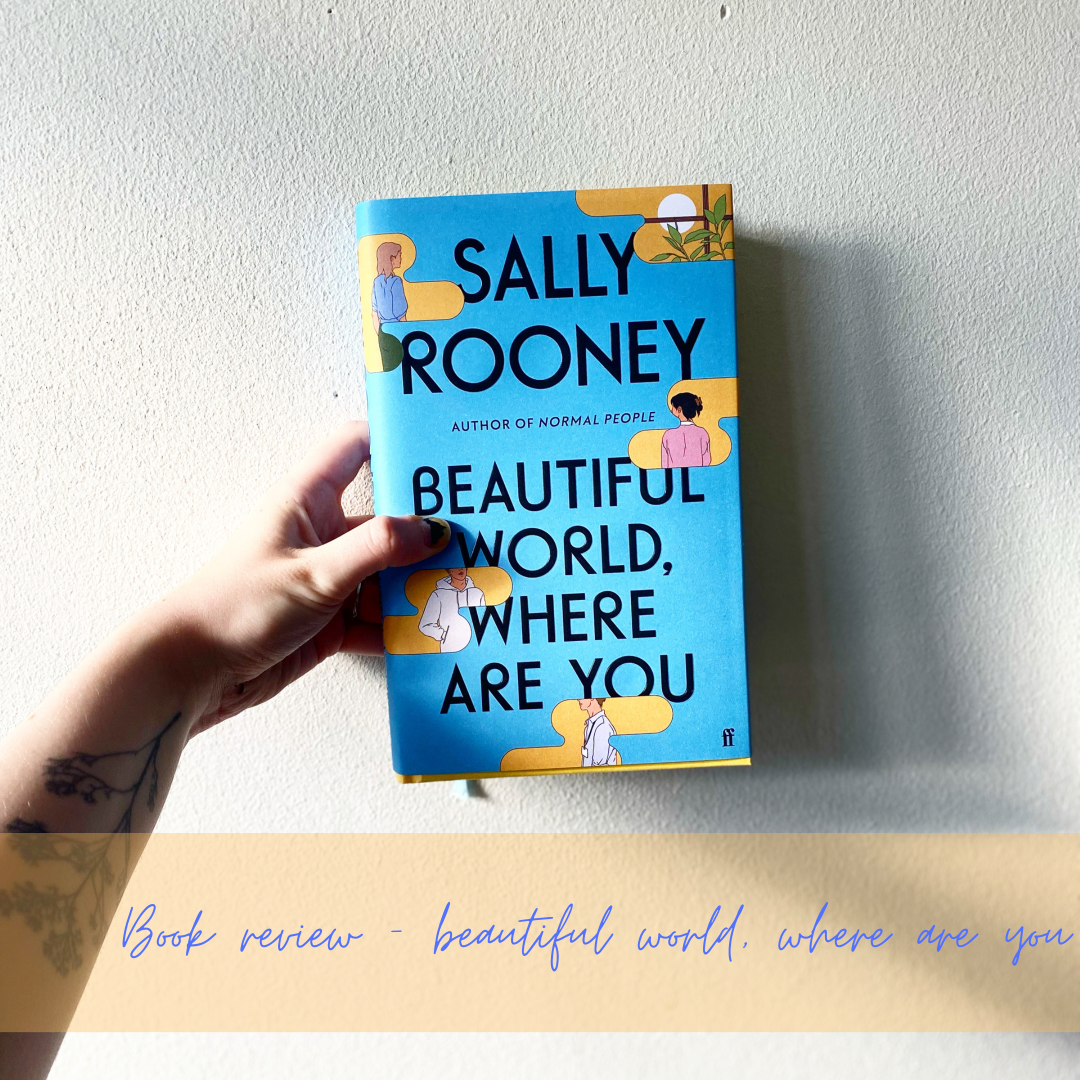 BEAUTIFUL WORLD, WHERE ARE YOU

Within about seven seconds of seeing the announcement of Sally Rooney’s third novel back in, what, January? I had ordered a signed copy to get to me the first second it could. Mid September, I took it upon myself to stay inside the whole of what was one of the last hot days of the year to wait for the book, despite knowing it would fit inside my letterbox just fine, therefore meaning I did NOT have to cancel my plans when my delivery was late. But was it worth it?

I have far too much to say about this, so let’s just get into it –

My SIGNED (!!!!!!!) hardback copy of BWWAY is beautiful and sturdy, and I cracked into it not long after decimating the packaging it arrived in. Rooney’s third novel tells the story of separated best friends Alice and Eileen, and sees them grapple with their careers, family lives, their wants, their perceptions of a decaying world, and love. We read one chapter of Alice’s story, then an email from Alice to Eileen, before reading a chapter of Eileen’s life and an email from Eileen to Alice. So, we have a mix of third and first person, and a personal view of the story’s events through Alice and Eileen’s eyes. The way we first receive information, and the way Alice and Eileen convey it to each other, is so different and really telling of their characters.

Alice is a famed novelist facing returning to her career or retiring from public life. She rents a cottage in a small Irish town, up in the hills, isolated from the rest of the population. She meets Felix on Tinder, and the two are very different – she is well-read, calculated, collected, and Felix is just Some Guy. Eileen works for a literary magazine in Dublin and is grappling with the history she shares with her lifelong friend Simon. Eileen deals with family drama ahead of her sister’s wedding, and Simon impresses almost everyone he meets, though baffles most when they learn of his active approach to Christianity; he prays, believes in god, and goes to church – his peers find this odd.

Eileen and Simon’s story was my favourite of the two as the pair danced the Will They, Won’t They?. They are both so sweet, and have wonderfully readable personalities and made decisions questionable enough to be frustrating, but are not annoying thanks to how likeable the two are.

Alice and Felix were intriguing for the most part, but Felix’s character takes a dark turn towards the end that isn’t ever really reconciled in a satisfying way. One thing that stuck out to me was how different Felix and Simon felt from their introductions to their ends – they’re different in ways that don’t feel like developed, but instead like Rooney changed her mind about the characters halfway through drafting. I digress – Felix takes this villainous turn as one night he belittles Alice in a way I found savage and really upsetting! It set me up for some development, maybe for Felix to be binned by Alice’s avenging angel best friend Eileen, or literally anything else, but this wasn’t to be. This along with some drama occurring between Eileen and Simon acted as the tangible conflict for the narrative that I felt came really late on.

Perhaps out of boredom or insecurity, Felix starts to antagonise everyone – his brother, Alice, Eileen, and Simon. He behaves badly and strangely but this is never acknowledged like it was in other Rooney narratives. There’s effort towards something that feels related to redemption, but isn’t actually redemption and does not make up for the discord he tried to sow between the other three characters. One could make the argument that his verbal attacks, which took the form of probing questions, really came from a place of genuine and sincere curiosity, but for me he came off as far too aggro. For this to go unchallenged, and for him to ultimately end up with Alice – it just didn’t sit right for me.

I feel that there are some definite markers of a Sally Rooney novel, and this new book feels meta in the way it responds to the acknowledgement of these markers. In her first two novels, nearly all of her characters have a troubled relationship with their fathers, and Eileen, Alice, Simon, and Felix are no different. Francis of Conversations and Normal People’s Connell both had wonderful literary offers come to them with what the reader perceived as extreme ease and Alice, in her 20s, lands an extraordinary book deal for her debut work that brings her the wealth that supports her throughout the narrative. Eileen and Alice’s emails to one another make pointed remarks around the discourse that has surrounded Rooney’s other stories and characters, which felt fun.

I’m afraid I can’t say this is my favourite Rooney novel – it didn’t blow me away like Normal People did even though I really wanted it to. Still, it was insightful, touching, affective, and real. Her characters were relatable and drove the story forward in an immersive way. On finishing this one, I feel a reread may be due to get my head really around everything in it, so I definitely invite anyone to have that first read to begin with. Despite this not being my favourite book, I think Eileen is my favourite character in the Rooney canon as she’s so personable and real and all round likeable.


this is an affiliate link – I will earn commission from any purchases made through these links to no extra cost for you.