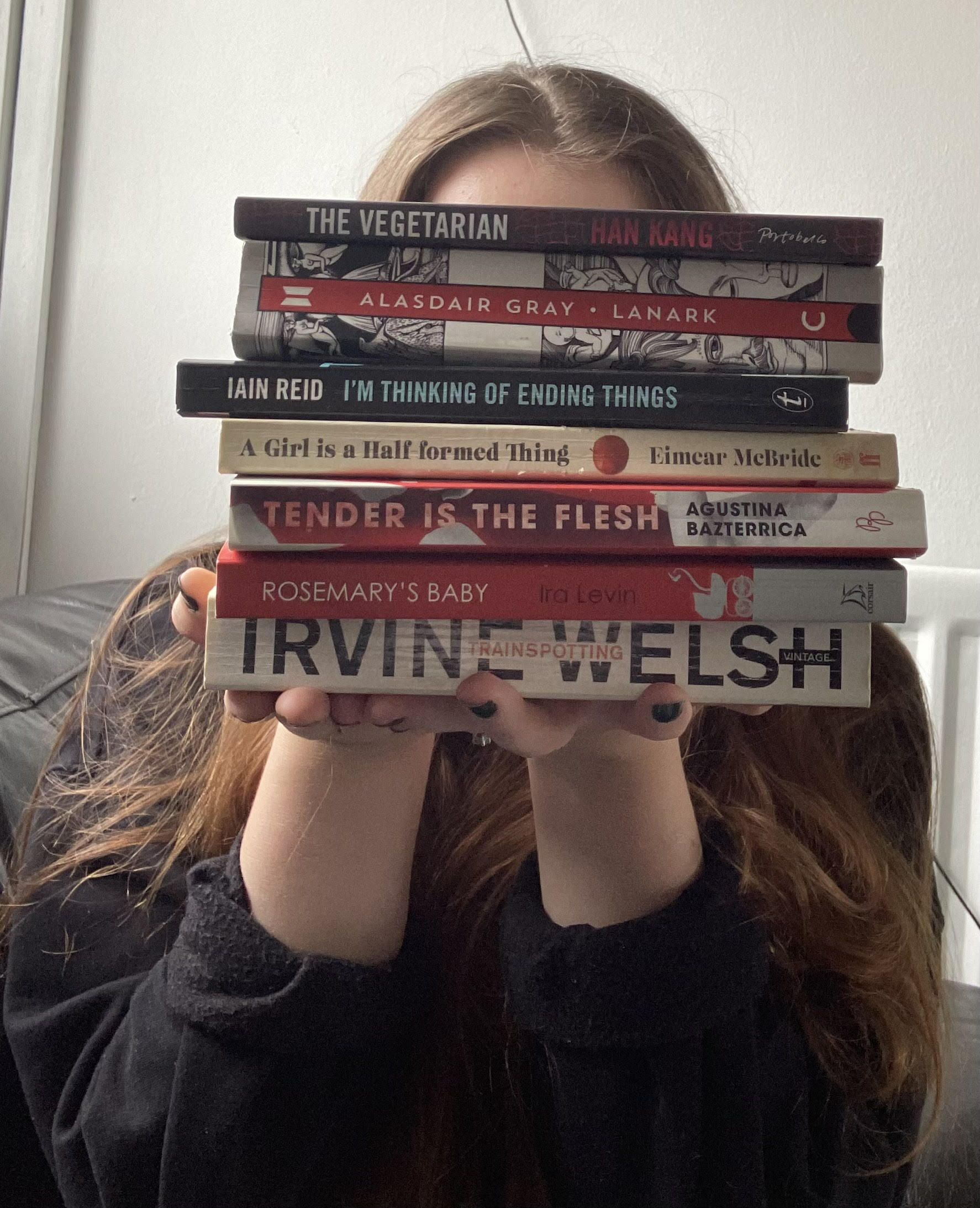 For me, a good book really makes me feel something. Sally Rooney’s Normal People was so overwhelmingly tender it made me feel a bit nauseous…like, in a good way though.

As a long time horror fan, I like books that fuck me up. Books that really make me think, that present situations I never in my whole life would ever want to be in, books that make me cringe because they’re so affective. Thanks to spiralling down the Tik Tok hole of disturbing books, I’ve been reading more of this content recently, and have been enjoying how physically sick these stories can make me feel.

Because I am such a generous person, I have compiled for you, dear reader, a list of seven books that shook me – two of which I really thought to myself, hey, I may not be able to read any further… I’m grateful I finished these books because not only are they horrifying, but they’re also brilliantly written stories.

NOTE: the links below are affiliate links – I will earn commission from any purchases made through these links to no extra cost for you.

An essential piece of Scottish canon. It includes many of the markers of Scottish fiction – listless, angry youth being violent and doing crimes, mostly. Trainspotting largely tells the story of Mark Renton, a heroin addict who often tries to better his life by finding a job and quitting skag, but just as often falls back into the deep well of addiction. He is accompanied by Begbie, perpetually ready for a square go, the nihilistic Sick Boy, and the too innocent for this world Spud.

If gratuitous violence and the terrors of addiction weren’t enough for you, then how does diabolical scheming and premeditated murder sound? There are two chapters in particular that really get to me as Welsh plays with expectation so well. The first comes early on and is a love story of two ships passing in the night. If you’re familiar with Welsh’s work, you’ll know that happy endings don’t come by too often. During this chapter, I was really waiting for everything to go wrong for the centric couple. And it didn’t. As far as I’m aware, they’re happy.

The other chapter, however, is nefarious. I remember reading it one morning on the bus to uni. I won’t say anything about it because if you haven’t read Trainspotting before, you should really experience it fresh for the first time yourself. But this chapter tells a particularly harrowing tale of love and death that sees a child put in mortal danger. Seriously, I really thought I couldn’t finish it. Read it and tell me if you feel the same – you’ll know the chapter when you come across it.

Underrated wonder. This tells the story of a Korean woman who decides to become a vegetarian. Her family and husband are very perturbed by this revelation as meat is such a staple of their lives. They are further shocked by her following changed behaviours.

The first three sections are told two chapters are told through the perspectives of men who see the woman as this unearthly, strange being. Their skewed understandings of the woman even bring supernatural elements into the narrative as they simply do not recognise that this woman is suffering from poor mental health. As such, not only does she receive no support, but she is taken advantage of and goaded into more unsettling behaviour. It is not until the final section when the story is told through another woman’s eyes that we see the true, severely broken state of the main character.

I really devoured this. It was mental and so terribly sad. I would classify this as nightmare fuel because it’s so easy to see yourself in the main characters position – in dire need of help but no one understands why or how you need help, and no one can fix it.  I recommend this one so hard – I actually think it’s due for a reread.

Another piece of essential Scottish fiction. Lanark is a chunky boy, longer than what I’d usually read but so encapsulating and vivid. It is subtitled ‘a life in four books’ and tells the story of Lanark, an amnesiac who wakes in the mystical but bleak Unthank, and Duncan, a perpetually misunderstood Glasgow artist.

This really is a life in four parts, it really covers all the bases of the characters involved, and the two different stories mirror each other beautifully. It’s a crowd pleaser with its high-fantasy, dystopian world seen in books three and four, and it’s story of a working class Glaswegian boy with big dreams who just doesn’t understand the people and world around him in books two and three.

Duncan’s story is unsettling. Things don’t often go right for him. He is grounded by a tight-knit family who genuinely love him, even if they can’t quite understand him. Book four shows his mental decline – the world just seems to be a bit too much for him. I knew what was coming towards the end of his story, but that didn’t make it any easier to read. I felt sick to my stomach as I read his actions, his skewed thought process, leading him into the next chapter of his life.

A GIRL IS A HALF FORMED THING

When I bought this book, the shop owner told me she loves McBrides work for how bleak it was. Loving this review, I set about reading it that afternoon. Jesus, she was right – this is bleak. I now have a fucking terror reaction when I see this book in my house.

This is not a horror, though very horrible things happen within it. An unnamed girl starts telling her story from the womb of all places in a pre-stream of consciousness narrative. We see her struggle with life in a single-parent household; her mother is overwhelmed, and after she is shamed for not being a strictly practicing Catholic, is abusive towards her two children. The girl has an older brother who is nearly constantly in a state of ill-health. As she grows older, the girl struggles with her sexuality, using promiscuity to cope with her trauma.

All of this is so heartbreaking. It’s difficult to read, not just because of its challenging subject matter, but because of the way in which is told: pre-stream of consciousness delivers the story in incomplete, not fully formed thoughts. As the main character is in violent and traumatising situations, her narrative becomes harder to digest as sentences and words are inverted and everything becomes disjointed. For this reason, I’d recommend reading this relatively short book in as little sittings as possible. As you read more, you get to know the main character’s mind and I found it easier to understand her. Stepping away from the book removes you from her mindset, and you do have to take time to step back in.

If you really, really want to feel something, I’d recommend this book. It’s not for the faint of heart, but it is so worthy of your time.

A long time favourite of mine! Wuthering Heights tells the story of Heathcliff, a man ruled by his heart and for his love of Catherine Earnshaw. When he can’t have her, when he really can’t seem to catch a break and level himself with his peers, he hatches a plan for revenge that will not only devastated his adversaries, but also generations to come, too.

Why is this romantic classic nightmare fuel? Simply put: it’s not a romance, dummy! This is gothic horror – a man so ardently obsessed with a woman that he has to ruin literally everyone’s lives. Nothing deters Heathcliff from his warpath, and we see the mental and physical tolls it takes on him too as he deteriorates after so many years of feeling nothing but pure hatred and jealously.

Really, it just sucks being a woman and having to put up with this calibre of creep. If you think Wuthering Heights is romantic, do not speak to me or my son ever again.

This is a psychological mind fuck with a really cool adaptation that came out in September of last year. An unnamed woman considers her relationship with relatively new boyfriend Jake as the two embark on a very long and rather awkward drive to his parents house.

The narrative is interlaced with two characters having a discussion about something terrible that happened in a school, and we’re not given much context as to what they’re talking about or how it fits in with the characters we’re actually with. Then at the end, all of it comes pouring in together, and it devastatingly makes sense.

Especially towards the end, Reid puts you in a challenging mindset and it’s uneasy wading your way though it. For such a short text, it is dazzlingly effective.

Ira Levin is a truly underappreciated horror writer, which is weird because Rosemary’s Baby and the Stepford Wives are such essential pieces in the horror canon. His favourite work of mine is A Kiss Before Dying, which I heartily recommend to anyone and everyone, but I wouldn’t call it nightmare fuel.

Rosemary is a young and hopeful wife and homemaker, elated to her core by the apartment her husband Guy and her have managed to secure. It’s in an older, very beautiful, stately building, and she goes about getting to know her neighbours and decorating her home exactly as she likes it in peace. She’s elated when she finds out that her husband finally wants to have a child with her, too.

The conception of her child is problematic, as is her pregnancy. She comes to be unable to trust anyone in her life – not her older neighbours who took to loving Rosemary and Guy like their own children, and especially not her own husband. Levin’s writing style is so amazing – witty, pointed, and fun. The ending to this story really slaps you across the face in an extremely satisfying way. The hype for Rosemary’s Baby is absolutely warranted, and any horror reader should add this to their TBR if they haven’t already read it.