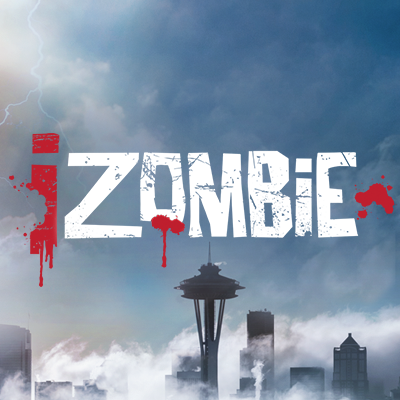 I think the acting on iZombie is going to get better and better as the weeks go by this season, because it was ON POINT this week.

Sound mixing was really good this episode as well, I noticed; in Angus’ first scene, when he is preaching to his new zombie followers, Hozier’s ‘Take me to Church’ starts playing and the music swells along with the scene.

So, what actually happened this week? Let’s have a looky look.

This week Liv chowed down on the brains of an insufferable rich lady with a massive estate and many servants. And so, she became insufferable too. She chastised Clive often, patronized Major and aggravated Ravi. When it is found that the victim’s cook is the murderer (she did so to inherit the million dollars that would save her young son), she begs Liv and Clive to take her son to a heavily guarded neighbourhood in New Seattle, plagued by extremely anti-zombie terrorists so they can smuggle him out and get him to his father. Clive insists that he can’t and Liv agrees – that is, until insufferable, selfish, rich lady brain starts to wear off. She and Ravi then take the kid to the neighbourhood (which Major and his squad are guarding) and successfully smuggle him out. 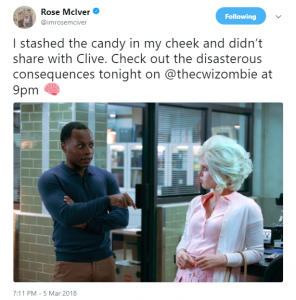 It’s revealed this week that Liv and Major are sleeping together which made me so. Damn. Happy because I love Liv and Major together. Unfortunately, before I can really fully rejoice in their reunion, they break right the fuck back up. Fucks sake.

Additional note: Liv looked a little tan (or at least, less pale). Is she finally taking part in the former part of tanning and dyeing?

Angus is leading a mad religious zombie crusade; it’s like, a little socialist almost?? He’s handing out free brains to hungry zombies, destroying corrupt zombie feeding street schemes and insisting that brains must come free to all. He’s got the hammer in hand as his weapon of choice and symbol of his leadership, all we need is the sickle and we’ve got a full on communist revolution!

Having cut his extremely shaggy and dirty hair and beard that we saw him in last week, he is pale and rocking the white blonde hair. He kind of looks like an evil, male Liv? Perhaps that’s the goal. Are the creators trying to establish Liv and Angus as opposites, prepping for a big stand-off later in the season or the series? 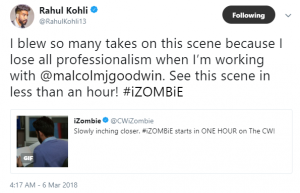 Major is leading his new teenaged members of his squad into the streets to protect the undead and dead alike of New Seattle. He finds trouble in some teens defacing a café which “proudly serves zombies.” One of Major’s shaken recruits picks and fight with the hooligans and scratches one of them, who cry out to be killed before he can be turned into a zombie. Major spots someone filming it and is distressed.

Later, as mentioned earlier, we see him standing guard outside a dangerous New Seattle neighbourhood. When Liv and Ravi try to gain entry to smuggle in the cooks’ son I mentioned earlier, he reluctantly lets them through (but is unknowing of what his pals are even up to).

When Liv is back home, Major goes to her and they fight it out. Liv seems disgusted and all high and mighty on her “holier than thou” brain that Major was reluctant to risk his life to save this child, but Major stresses that he could have been put in a “deep freeze” (I guess this is a Filmore Graves punishment for zombies) or severely punished. Sick of Liv and her superior attitude, Major breaks off their sexual relationship.

Ravi just shades everyone in this episode. He doesn’t really do much for the plot, save helping Clive and helping Liv smuggle the kid away, he’s just super shady throughout. It’s good shit. I loved it.