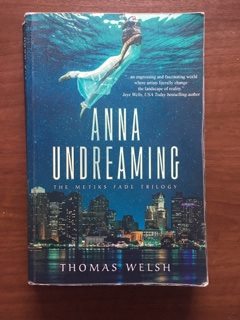 Thomas Welsh’s debut novel Anna Undreaming was fantastic and because of its intensity, action and creativeness, I am dying to read the next, unnamed instalment of the trilogy.

Anna Undreaming is interesting because of its challenging and partially broken main character Anna. Through her eyes we see not only the entrance into a completely new, different and often frightening world, but we also see an extremely realistic and sobering view of loss and depression. Old demons come creeping back up on Anna throughout her first journey when she sinks low; memories she tries to hide in the back of her mind won’t be forgotten or defeated so easily, much like many of the monstrous villains she faces. She’s a non-stop lady who uses her weaknesses, anger and even hopelessness as weapons against those who would hurt those closest to her. When all seems lost, she finds strength in insisting that if she must die, she will die fighting and uses that to keep herself alive. She’s not perfect and often impatient and arrogant, but when she is knocked down I couldn’t help but feel extremely sympathetic for her. When she rose back up I couldn’t help but grin.

Action and suspense is nearly ceaseless – from the first chapter we see Anna encounter a kind of danger that threatens her and a friend, Sue, when a man drugs them both with implied intentions of taking advantage of Sue. Anna solidifies herself as a feminist fucking icon when she says no and, despite being weakened and delirious, puts in her best effort to save her friend. She is then thrown straight into a nightmare world where in which monstrous beasts kidnap and kill with no mercy or thought. With the help of a friend she once doubted, Teej, she finds her way out and together they navigate the world of Hazes and Dreamers as Anna learns about her position of being a Metik and an Undreamer.

Villains were unique and frightening in their own ways – from nursery rhyme horror monsters to men who are evil in an everyday capacity, only enhanced with complex powers only themselves could understand. Each enemy faced have perplexed and challenged Anna in different ways but she’s getting stronger, smarter and more able to overcome.

The book is a great example of story-telling: where so many new concepts are being introduced and thrown at Anna and us, the readers, Welsh makes all these ideas comprehensible while still pushing on the plot. As he further establishes his world page by page, it never felt unintentionally confusing. If I was a little lost, so was Anna.

I’m looking forward to book two because I’m expecting seeing our main characters, Anna and Teej, in extremely vulnerable positions. Anna, newly saved from a depressing hole called the Sump, which seemed inescapable, is all too familiar with old foes: bleakness, hopelessness, isolation; what she routinely calls desolation. She was on the edge of letting herself conform to the fates of every other Sump dweller: death. Teej, battered and damaged, is hardly in the position to save Anna from this level of emotional destitution but they will have to heal each other regardless and fight on against evil Dreamers.