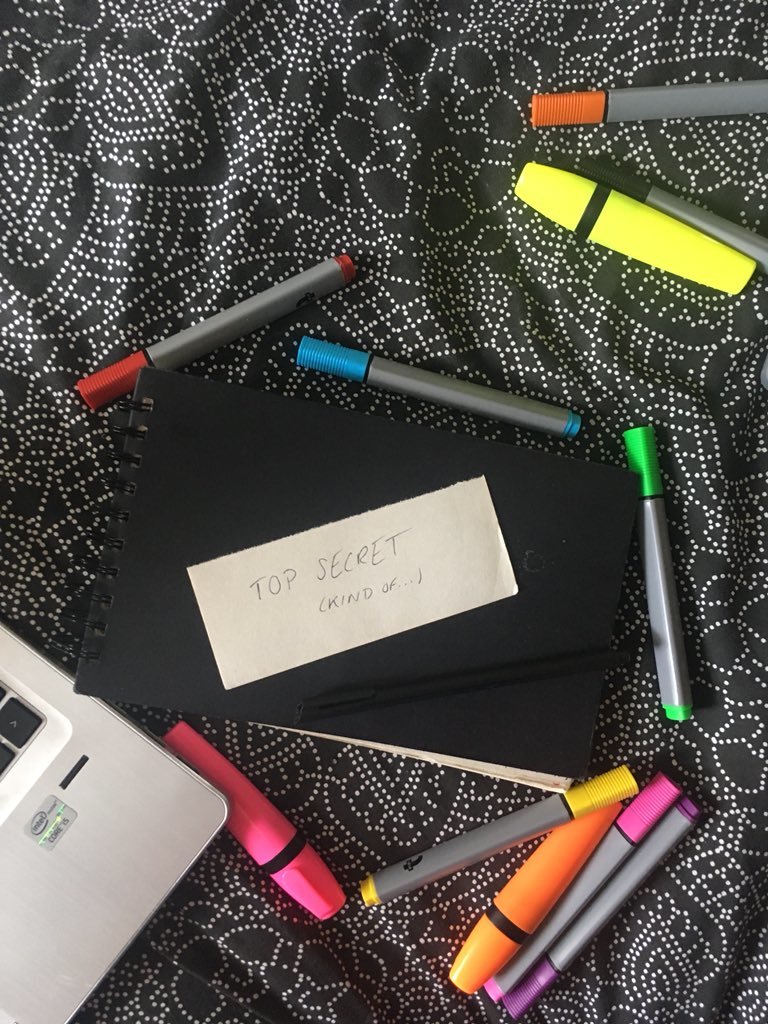 It’s taken many full to the brim and colour coordinated notebooks (that could be interpreted as being the journal of a complete madman) but I’m actually SO BUZZING to say that I’m like, approaching the end of writing a book??? Wow. Crazy. Jesus.

The book I’m working on is in no way the first book I’ve begun written. Before this project, I was pretty invested in a horror/thriller/mystery type thing that…honestly? It got too intense for me. I’m not talking about the story or the plot, I’m talking about writing and planning it. I last wrote it before Christmas, I was on around chapter 8 and had 2 more chapters after that one planned. I realised that I was very firmly in the middle of the storyline and, fumbling and doddling, I scared myself. I didn’t know what to say next or where to go next and I put too much of myself into planning it and it was definitely mentally exhausting. This is a project I spent so long planning and working on and I will definitely go back to it, but it’s been good to have a breather.

It was the beginning of the second semester of my second year of uni. I was sitting in my creative writing seminar, scribbling down a wee story from a writing prompt we had been given. Something about two people meeting, two specific people. I went for a fabulous and powerful publicist meeting with an awkward and boring writer and tried to describe some discourse between them. That’s how I got the first two of my six main characters in my book.

Saying where the other four characters came from, or the plot, or anything else came from is difficult because I really feel like it all just flooded into my head at once from out of nowhere. Hopefully that doesn’t mean I got it all from whatever TV or movie I was half-listening to in the background or anything like that. Talk about fucking heart breaking!

Pressing pause on my old project to pursue this one was a great decision on my part, I think. Writing, planning and thinking about this story has actually made me so happy because it’s so fun! The story is way more light hearted than my murder mystery, the characters and all weird assholes who I’ve enjoyed getting to know (I knoooow, I feel like a douche saying shit like that but I mean it!), and actually writing it all out has made me unashamedly laugh at my own story. This is definitely what I needed to write and I’m so happy doing so. I seriously cannot wait to finish my first draft, begin and finish my second draft (and however many drafts may or may not come after that) and then send it away to some publishers…from there, fuck knows how it’ll go, really.

This change in genre has been a long time coming for me. I used to be like, exclusively horror when it came to writing, reading and watching. I loved creepy pastas and spooky stories; Stephen King was definitely a god to me. All of my shorts were scary little tales and I was super proud of them! But most of them were written when I was 16 and edited and edited and edited again for re-publication for any new blogs (be it for tumblr, wordpress or otherwise). But this whole shift came when I started reading more light hearted content, and more Scottish work. When I first watched Filth (2014) I got SO into Irvine Welsh. I’m ashamed to say I didn’t even watch Trainspotting until I was like, 20. I’m really ashamed. So, with the change in what I consumed happened, what I created changed too. Where my former project was set in 1985-86 Canada, my current project is set in Glasgow, last summer. I’m fucking loving it.

I’ve spouted enough crap about how excited I am to finally be reaching the end of a project and how I’m so happy to be writing really fun stuff. I’m turning 22 on Friday and as this is kind of like, my own little new year, I guess. Technically. As my own New Year’s Resolution, I want to start blogging more and talking about writing and the books I’m reading and I’ll probably bitch and moan about uni too.

But yeah. This has been fun. Stay tuned guys and gals x