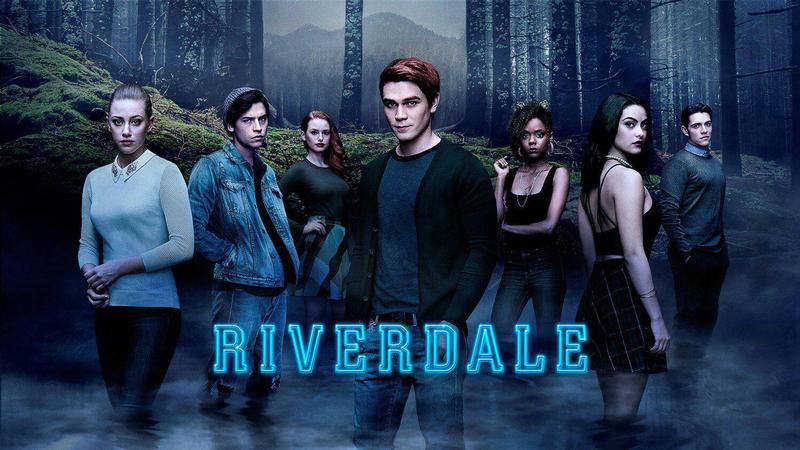 MY SCORE: either 1 and 7/7, simultaneously

Riverdale is a 2017 CW show and it is the most addictive disaster that I’ve ever seen.

One night in February last year, I decided to stick on this new Netflix sensation that seemingly everyone was losing their shit over. I’d seen trailers and heard things, seen some promotional content too, but it all looked so cheesy and just extremely CW to me (the CW is definitely a trademarked cringey network) and perhaps not my cup of tea. Curiosity got the better of me though, and I stuck it on.

I binged four episodes. I had things to do, like pack for a weekend away I was going on and do homework, but the first few episodes had their hands around my neck and I couldn’t stop. After the fourth episode, I decided that enough was enough: I really needed to get to what I had to do. So, I stopped watching and decided to quickly go to my friends group chat on Facebook to discuss, since I knew my friends had been watching it too. I told them that I had just watched the first four episodes, so they weren’t allowed to spoil the rest because I had put my foot down and was NOT watching any more that night!! Then they told me that there were actually only four episodes on Netflix at that point, and that I was actually fully caught up to the show, and that I’d have to wait a week for the next episode.

So, that was it. It wasn’t that I had put my foot down and was stopping myself from watching more Riverdale, it was that there was no more for me to watch.

Ah, fuck, it hurt. I really wanted to see what happened!

As I said, Riverdale is an extremely cringey show. It has ridiculous one liners, astronomically unlikely plot points and episode by episode, it is falling more and more off the rails.

In season one, we saw teenagers dealing with the mysterious death of a classmate, Jason Blossom, and falling into the investigation of his murder as they find that their own family members may have been involved in the enigma. By the end of the thirteenth episode, they had firmly solved the case and discovered the murderer, and were thus dealing with the aftermath and personal trauma. That’s when our hero Archie (KJ Apa) witnessed the near fatal shooting of his father (Luke Perry), and that was the catalyst for the next season.

Season two saw the town drink the Black Hood Kool Aid as the teens, Archie, Veronica (Camila Mendes), Betty (Lili Reinheart) and Jughead (my childhood crush, Cole Sprouse) hunted down the man who nearly killed Archie’s father and had killed and hurt many more of their friends and relatives. We saw really weird tangents, like Archie being kidnapped by some guy from Veronica’s past who had recently tried to sexually assault her and rape her friend Cheryl (Madelaine Petsch). Veronica manages to save Archie by like, pretending to want to fuck the guy and drugging him? Then she extorts a million dollars out of his parents? Also Veronica’s dad is a crime lord. Meanwhile, Jughead is like, joining some gang and slowly becoming its leader as his father (who was imprisoned around this time) was previously the leader. Betty stays on the case of the murderer, the Black Hood, as he starts to toy with her personally by calling her and threatening her friends lives if she doesn’t cut them out of hers. This murderer is like, “don’t be friends with this ginger kid or I’ll kill him.” Like?? Bigger fish to fry?? You literally murder people but you are so engrossed in the social life of a teenaged girl?

Season three is underway with six episodes currently aired, the seventh airing this week. In season three, shit has really gone down.

There’s witchcraft and cult shit going on with Betty’s mum and sister. Betty’s sister Polly joined a cult after the Black Head was like “I’m coming after sinners,” and she was like, “I’m an unwed mother of two incest babies” (long story). She came back from the cult, dubbed ‘the farm,’ on a recruiting mission. She and her mother try to recruit Betty. Meanwhile, the rest of the town is now heavily invested in a Dungeons and Dragons rip off called Gryphons and Gargoyles (GnG) which seems to mirror the world of Riverdale; things that happen in the game seem to be happening in real life. While all of this is going down, Archie is in Juvie after he was framed by Veronica’s dad for some kid dying in season two (again, long story). Veronica, Betty and others break him out as Betty takes a break from cult and GnG shit, and Veronica takes a break from running a speakeasy under the town’s diner.

Like, literally, try to explain the full story of Riverdale to someone in as little sentences as you can. It’s impossible. There are so many weird fucking tangents and side stories and B plots and C plots and D plots… it goes all the way down to Z plots, basically. So much is going on, it’s kind of assaulting!

There’s a really cool episode in season 3 where the kids play their parents in the 80’s or 90’s and Lili Reinheart, playing a young Alice Cooper, cements herself as Girl Crush of the Year in her punky lace and leather outfits with her enviable blonde curls. Anyway.

I mentioned weird one liners earlier, and the first one that comes to mind, and the one that sticks in my head is a season two line from Veronica. Ahead of her Confirmation, she throws the line out, “as my abuelita says: praise Jesus.” I can’t remember what she’s saying it in reference to exactly, but she says it in this sultry, devious voice and it really? Fucks me up? Like? A lot of people say praise Jesus? There are a whole lot of things that annoy me about that line; too many to get into here.

Despite being the weirdest, unironic show, it is something I am wholeheartedly invested in. Every Thursday morning I refresh Netflix about every two minutes so I can watch the newest episode the second I am able to. Then, over the course of the week, I watch it again. I watch it and I think, “wow, how cheesy and weird and bad,” but then I think, “wow, that was the best thing that I’ve ever seen.” Then I annoy my boyfriend by giving him a scene by scene recap of all the things that have happened.

At the end of the day, Riverdale is a well-acted, well produced and immersive show. Sure, the writers pull plot out their asses which makes it so weird and random, but it also makes it unpredictable I guess. I never really manage to figure out who the Big Bad is or who is behind the mystery before the show tells me. I cringe and grimace when I watch it, but I’m also kept on my toes so really I can’t complain. This show is the worst show airing, I can say confidently. I can also say with even more confidence that it is so ridiculous and crazy which makes it so, so, fun to watch. You’ll catch me rewatching Riverdale until the day I die. 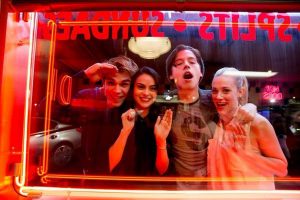